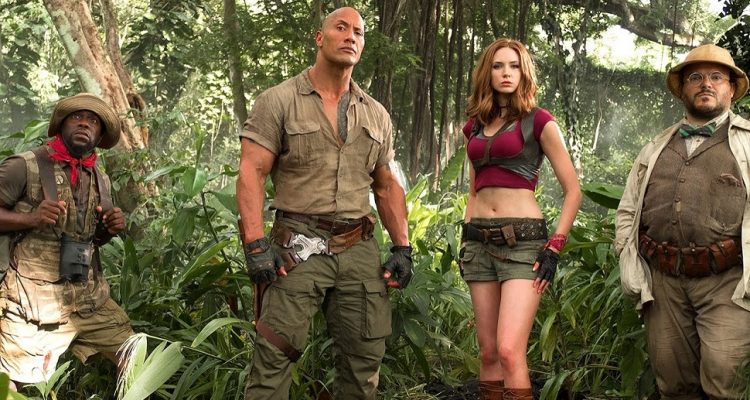 Jumanji: Welcome to the Jungle (2017) Review

Go see Jumanji: Welcome to the Jungle. Have fun with this movie, and just don’t take it seriously. You’ll enjoy it more. Maybe wait a week or two, because the movie is sold out everywhere. I went to 2 theatres, lined up for 30 minutes to wait for an 11pm show. I know, I was surprised too.

This movie is fun, funny, and doesn’t take itself seriously, unlike the original movie, which was rather serious.

This movie makes fun of itself, its characters, and its actors – which just made it all the more entertaining. When a movie jokes about how muscular Dwayne Johnson is, and takes jabs at how short Kevin Hart is, you know you’re in for a good time.

The cast were great; each actor brings in a different element of comedy, but hands down the best comedic performance goes to Jack Black. He steals the show playing a 16-year-old girl trapped in the body of a middle aged, overweight man. This character is hands down the funniest part of the movie, which basically solidifies why Jack Black is still the best comedic actor in the business. Every time he spoke I cried with laughter.

Kevin Hart has some great comedic moments as well. He basically plays Kevin Hart making fun of himself. I feel like most of this movie was probably improvised, which is why these comedic actors make it work.

The movie tries to tie into the original, but really doesn’t make any connections. I feel like the writers watched the original on mute, and decided to make poor attempts to connect the two films. Such as, at the end of Jumanji we see the characters throw the game in the water, which is later found on the beach by two French girls, but this movie basically forgets this and opens with a character finding the game on a random beach in the United States. Then, once the character finds the game, he gives it to his brother, but the brother neglects it and decides to play his video game system. Thus making the game angry and jealous, turning itself into a video game cartridge to appeal to the character. Yeah, stretch…

Another problem with this movie is the villain. It suffers from the Marvel Studios villain problem. Doesn’t really do anything, and is easily beaten. Need I say more?

Even though the movie suffers from a few inconsistencies, and a poor villain I can look past this. Jumanji is funny, the characters are hilarious, and it just makes for a fun, lighthearted movie, which most movies in 2017 apparently forgot to be.