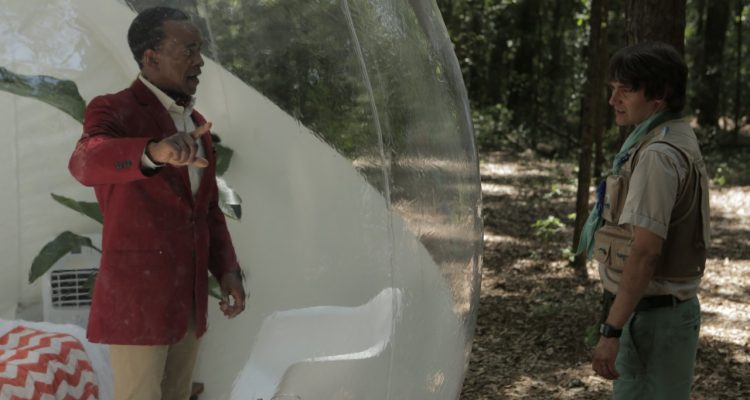 Sasq-watch!, available now on VOD and DVD from Screen Media Films, is a comedy about two chaps, Nigel and Oscar, who have finally gotten funding for their sasquatch expedition! But when their guide bails and rival Claus also joins the hunt, they must assemble a rag-tag crew of outdoorsmen to be first to track down the undiscovered beast. We speak to director Drew Hall about the movie!

The film has undergone a title change I see?

Is it fair to say the movie is influenced by some of the great classic monster movies of the past? Can you talk about those influences?

D: I’d say I was more influenced by 80’s movies. When I was growing up the sort of carefree approach to problems was always a fun Sunday movie vibe. When I read the script the comedic elements in it reminded me instantly of those kinds of movies.

How hard is it to make an independent movie?

D: It’s always hard to make an indie, but I think that struggle is what provides a great backdrop for finding real moments in the film. If it were simple, then it would be a paint by numbers movie and those get stale really fast.

How difficult is it to write jokes? Do a lot of them come together on the day?

D: Comedy is hands down the hardest content to write and direct. There is so little room for error.  With the cast in this film we allowed room to do some improvisational bits. All of them are so talented – we’d do one on the page and one that was theirs – which works best as it is character driven comedy mostly and who knows the character better than the actor.

And in terms of distribution, with so many films getting produced these days, was it difficult to find a home for the movie?

D: That’s always the tricky part. Finding distribution is never an easy venture, but you have to go with your gut and pray that who you align you film with gets the overall vision of the movie. We were very fortunate to have great partners on this one.

How important were festivals for the film?

D: We premiered at Sidewalk film festival because we made the film in Alabama and I felt that it was an important statement to show lawmakers here that the state’s film industry is alive. I was terribly nervous as no one had seen it, but we sold out all of our screenings and they had to expand another screening for us. That was great as most had no clue we filmed in their back yard.

Festivals are pretty important – but from what I know now – just make sure you’re ready for the expense. It’s not cheap to submit and most of the time it does not effect sales, it does however get the word out.

Is there anything you did on this one that you wouldn’t do on the next?

D: Not really no. This was a pretty amazing shoot. We got blessed with an insanely good cast and crew, but If I really dug in, I would have probably shot some scenes until we hated them. It just seems like with comedy the more options you have the better.

What about a sequel? Keen?

D: Sequel sure, but I’d love to make a series called Nigel and Oscar vs._____________ where we have them face off with another paranormal entity. I’d add Squatchie as a new cast member – think of him like a 90’s frat boy. Kind of jerk, but sometimes shows a heart of gold.