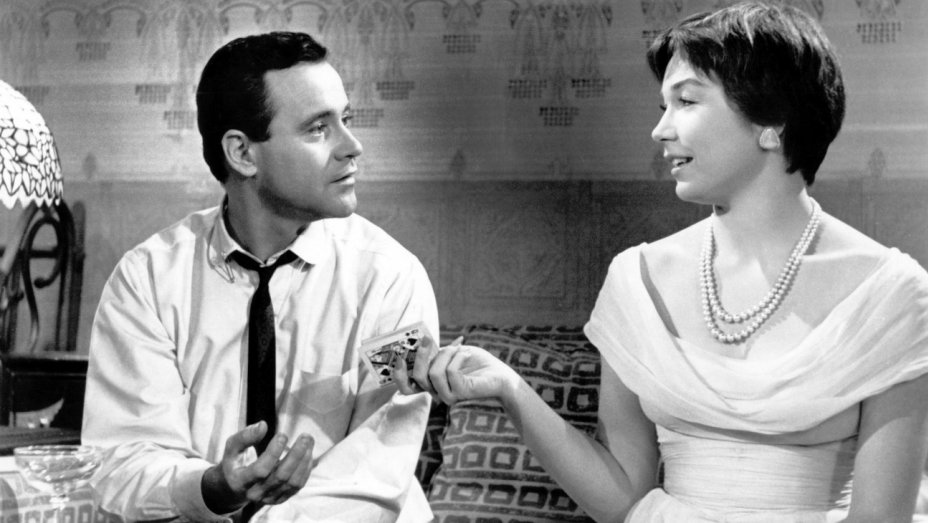 A flawless film. A classic for the ages. Beautifully written and acted by all.

Plot: A man tries to rise in his company by letting its executives use his apartment for trysts, but complications and a romance of his own ensue.

Review: At the end of the day, C.C. Baxter (Jack Lemmon) just wishes he can go home to his little bachelor pad after a long day’s work at the office, but he knows he never really can. Everyone in the sprawling office complex seems to be in the know that if they can get some action on the side with ladies they pick up at work or at the bar, they can just stop on over at Baxter’s and use his pad for a half an hour. Baxter literally has to start scheduling visitors after hours, and it gets to the point where he starts sleeping on park benches because he’s such a pushover, and everyone knows it and treats him like it. But Baxter has a heart too, and it gradually starts to get away from him when he nurses a little crush he has on the cute elevator girl named Fran (played by Shirley MacLaine) everyone else in the office has marked as hard to get, and just when he thinks he’s managed to get a date with her, she stands him up … for his boss. He’s crushed when he realizes that she’s been carrying on an affair with the boss Mr. Sheldrake (Fred MacMurray) for months, and that her outlook on love and life has been crushed to smithereens by the way Sheldrake treats her. Accepting a raise for the use of his apartment whenever his boss feels like it, Baxter’s expectations and self worth diminish as he starts to accept his place in the world, but a fateful day arrives when Sheldrake leaves Fran at his apartment in her deep funk and depression. She tries committing suicide, which gives Baxter an opportunity to save her, nurse her back to health, and allow himself to fall in love with her. What follows are the events that lead to Baxter empowering himself to be a “mensch” and stand up to everyone who’s ever treated him like trash, and in the process wins himself the girl of his dreams.

What else can be said of one of the greatest love stories ever made on film? Billy Wilder’s and I.A.L. Diamond’s The Apartment truly is a wonderful little piece of movie magic, and the dialogue and chemistry between Lemmon and MacLaine are simply irresistible. Lemmon played a real hero here, and the movie is pretty flawless in almost every regard. Seen today in our current hot topic environment of sexual harassment, it’s a little jarring, but if you’ve ever felt lonely or have experienced unrequited love, then this is the perfect film for you.

Arrow Academy recently released a now out of print limited edition collector’s Blu-ray set of The Apartment. Fitted in a hardback clamshell casing, the Blu-ray is full of choice special features and a thick hardbound book with informative essays and stills and artwork from the film. The transfer has been restored to 4K, and the plentiful special features include documentaries retrospectives, and interviews.