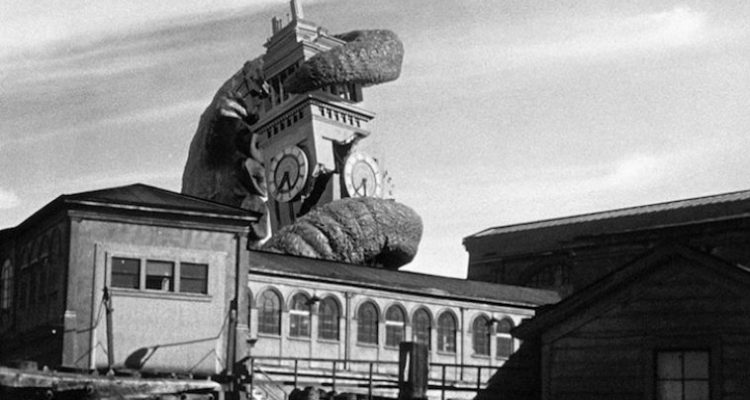 A plodding creature feature that features impressive effects from Ray Harryhausen, but that’s about it.

Plot: A nuclear sub captain teams with a pair of marine biologists to destroy a giant octopus after it attacks San Francisco.

Review:  I admit, I haven’t seen a lot of creature features in my life, especially from the 1950s. Never saw the original Thing From Another Planet, or Them!, or Tarantula.  In fact, the only movie I think I saw from that era that would have qualified is Gojira (which undeniably is a classic).

Therefore, I may not be the most qualified to review these movies, but hey, here we are. It Came From Beneath the Sea is, unfortunately, a very plodding, slow-paced movie that seems to take forever to get to Ray Harryhausen’s monster. While the effects are impressive, especially considering what he had to work with, the rest of the movie really does not deserve to have his work in the feature.

The plot is nothing to write home about. It seems to me that the presence of the giant octopus is fairly obvious early in the movie, but it felt like the first forty-five minutes were devoted to ascertaining that there is a giant monster and where it is. Throw in an ill-fitted love story that really wasn’t needed (and felt super-awkward as the other guy in the triangle felt perfectly fine about it), and it just was a bit of a disappointing bore. The actors do give it their best, but I don’t think they had a lot to work with, and it showed.

Harryhausen’s effects are spectacular as usual. The monster’s attack on the Golden Gate Bridge is legendary, as is its attack on San Francisco. There’s a great scene where you can see the beast getting its tentacles through the doorway of a ferry tunnel, and beside that shot it is a live-action shot of people trying to escape through the streets, making it seem seamless that the creature is attacking the people (even though the creature shots were completed months after principal photography).  The final attack on the monster in San Francisco bay is another highlight, where you finally see the fully realized creature, which looks great (even if it only has six tentacles instead of eight).

There’s nothing really more to say about this film, as it’s unremarkable in every other way. If possible, I recommend checking out Harryhausen’s work on this film in a YouTube video – the rest of the movie you can probably skip.  It’s not terrible, just not interesting in any way.