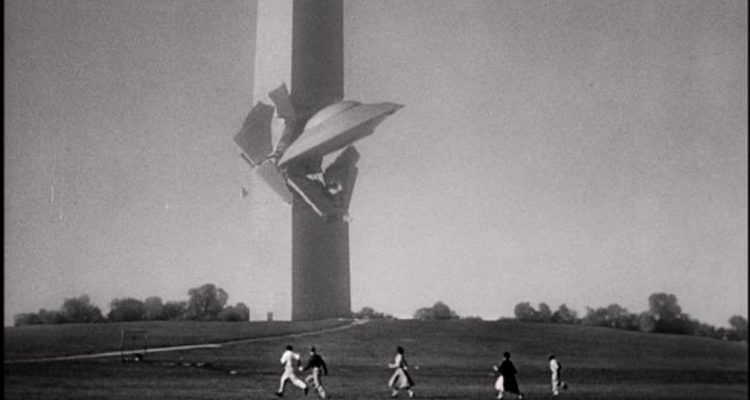 Plot: A scientist struggles to find a way to find a weapon that will help stave off an alien invasion.

Review: If you know anything about 50s sci-fi/horror films, it’s that they were generally allegories for the fears of the populace during the time they were made. The nuclear bomb had been dropped to devastating effect, and the Cold War was in full swing – folks were suspicious of everything and everyone. Movies have always been at their best when they reflect current themes, as it makes them relevant to audiences of the day (though few of those types of movies age well).

With that intro, we look at Earth vs. the Flying Saucers, a movie that was co-written by a writer that was on the Hollywood blacklist (and it took about 50 years to restore his proper credit). The film itself is nothing really that special. It’s the type of story you’ve seen before. Bad aliens want to conquer Earth, a scientist tries to figure out a way to stop them, he fails at first, the aliens attack, and then the scientist succeeds. I’m literally not spoiling the movie because there’s nothing to spoil; you’ve seen it all before. The actors are competent, if unspectacular, the cinematography is fine, the score sounds like it was created from public domain music, and it’s the type of movie you’ll forget you watched a week later.

However, what makes this one so special is the special effects created by Ray Harryhausen.  I don’t profess to have seen a ton of flying saucer movies (if that’s even a genre), but there’s something about the flying machines that Harryhausen made that look so damn realistic – you almost believe they could exist. When they attack and start destroying things (and consequently get destroyed themselves), the detail of the miniature work and how the action is all achieved is very impressive – especially considering Harryhausen had next to no money to work with. The design of the aliens was also pretty unique – I haven’t seen aliens like them before, especially their suits. The movie looks far grander than it has any right to because of Harryhausen’s genius work.

That’s about all I have to say about this movie. Most of it is okay, but nothing special, but if you do happen to want to check it out, I recommend it solely for checking out Ray Harryhausen’s handiwork. It’s worth the 85 minutes just for that.