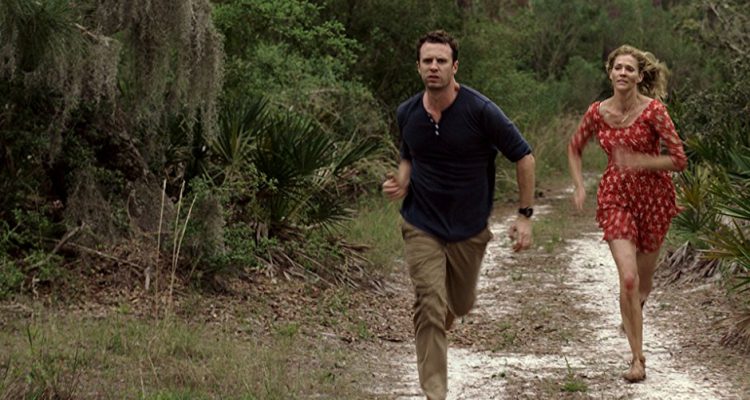 Isolation is a taut and engaging thriller with well-established characters and a story that flows well. It takes a while for things to get going and Lydia is pretty useless to have around in a crisis but it’s an entertaining watch.

Plot: Inspired by the true events of a couple vacationing on a remote island in the Bahamas who are hunted by a group of modern-day pirates, after their identities and their lives.

Review: IMDB describes this movie as an action thriller but there’s very little in the way of action and it’s really more of a character piece/thriller.

Our two leads are played by Tricia Helfer and Luke Mably who vacation to the Bahamas to rekindle the romance in their marriage after Creighton (Mably) has an affair.

From the outset we aren’t sure who to trust on the island as we meet Stephen Laing’s mysterious character William who doesn’t feel quite right. Then we’ve got Dominic Purcell and Marie Avgeropoulos who are definitely not what they seem; Purcell is at his best when he is playing a menacing bad guy and this is the type of role he excels at.

The cast are all very natural and I’ve always adored Tricia Helfer; she has a way of not seeming like she is acting making Lydia a very real and believable person. It’s a shame she’s so utterly useless whenever shit hits the fan though. I mean, all she seems to do is fall over and get out of breath and I was shouting at the TV telling her to get up at several points

Like I said, nothing much happens for the first half and it’s mostly establishing our characters but the story flows well and there is this underlying sense of impending threat throughout. It’s the final half hour where things get going and everyone’s true colours are revealed.

After all the buildup it gets pretty intense and comes to a satisfying conclusion; it’s also nicely shot and the locations are very appealing making for an entertaining thriller.

Overall, Isolation is a taut and engaging thriller with well-established characters and a story that flows well. It takes a while for things to get going and Lydia is pretty useless to have around in a crisis but it’s an entertaining watch.