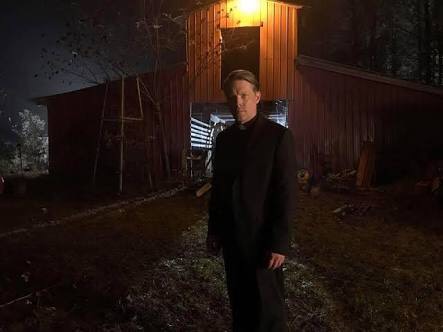 Miles Doleac, the star, director and writer of “Demons” (opening this week across the country), talks about how the exorcism thriller came about and how much Billy Friedkin’s classic was an influence.

Some actors, for one reason or another, are forced to direct films outside of their personal interests or preferred genre. Have you been lucky enough to only work within the genre, and your preferred type of film?

I’ve been incredibly fortunate to direct three features (The Historian, The Hollow, andDemons) and a short (Two Birds) that are all in different genres. I always think ‘character first’, so I’d say they’re all character-driven and audiences will find some recurring themes and motifs, but, on the surface, they’re all very different films and I’m proud of that fact.

How did Demons come about?

I’d been kicking around the notion of writing a horror script. A lot of folks were prodding me to write one. It is the single most marketable narrative genre and one that I hadn’t explored, so I was intrigued by the possibilities. Finally, I sat down and pounded out a synopsis. I wanted to do something with a religious component. Religion in horror films has always upped the ante for me. I’m a student of early Christianity and the Church. Some of my favorite horror films (The Exorcist andThe Omen, in particular; even The Seventh Sign) use Christianity as their jumping off point. Its soil is very rich, creatively. The synopsis started to get some looks, by one major player, in particular. I was being asked how soon I could send a script. It became clear that I needed to write one. I wrote the first draft in about a week and a half and I felt pretty good about it. I just forced myself to write on a schedule without overthinking things too much. It was liberating in a way.

Had you been a fan of possession movies previously? Revisit any as you were developing the screenplay?

I love The Exorcist. It’s a real masterwork of the genre. Any exorcism film has to reckon with it and its enduring legacy. I revisited it during the development process. It’s still utterly compelling. I also gave The Exorcism of Emily Rose another look.

How long has it been since it was completed? An anxious wait for the release?

We shot for 15 days in December 2016. I’m a very impatient person, by nature, so, yes, nothing ever moves fast enough for my taste.

Did it turn out as you envisioned it would?

It never turns out exactly as you envisioned it. There are so many variables on an indie film set that force alterations to the grandest plans. I do, however, think we benefitted, in some ways, from an abbreviated time line. It was the shortest period I’ve ever had between the completion of the script and the shooting of it. It was the shortest production schedule I’ve ever had on a feature. I think it forced us to focus our energies in such a way that we had to be at our best every day. And I think the movie is better for that.

Is there anything about it that works better than you ever dreamed it would?

I knew in writing her that the character of “Lara” would be special, but I think, especially in Kristina’s portrayal of her, she turned out even better than I imagined. I’m pleased to see that early reviews are singling the character and Kristina’s performance out for praise. I love Andy Divoff’s work as “Jasper” too. He’s such a lynchpin character and he could have easily turned into just a one-note kind of thing in the hands of a lesser actor, but Andy really lays bare the character’s soul. This whole cast was really amazing. I think, given our schedule and how much money we had, I didn’t really believe we’d be able to put together a cast of this magnitude and profile. Steven Brand, John Schneider, Gary Grubbs … and then these rich, complex, powerful performances by some lesser known, but equally talented, actors like Lindsay and Jessica. The coherence, range, and profile of the cast, given our circumstances, was certainly somewhat unexpected.

Were any scenes of yours lost in the editing room? Any moments you remember filming that you’ve been forced to cut?

This is the first feature I’ve shot where every scene in the script is in the movie. There was some dialogue we trimmed here and there, but also some brilliant, unscripted moments that actors came up with on set (Eddie’s rumination on the genitalia of ancient statuary, for example) that made it in to the film.

You’ve worked with William Sadler on your last two movies. He’s not in here though.  Any story there?

I asked! We just couldn’t make our schedules align. He was working on a television show at the time and there was just no way to make it happen. But, honestly, I’d have Bill in every movie if I could. He’s a brilliant actor, a consummate pro, has a terrific sense of humor, and is, in general, just a delightful human being. I’ll work with him again the first chance I get.

How much say did you have in how the film was marketed?

A fair amount. Keith Leopard and Uncork’d are very keen to allow their filmmakers to weigh in on nearly every element of the process. It’s something I appreciate very much about working with Keith, for the second film in a row now. He’s wants to know the filmmaker’s inclinations and deliver on that vision wherever possible.

Do you consider yourself a better actor than filmmaker – or vice versa?

That’s hard. And probably something best left for others to decide. I can only say I’ve been acting a lot longer and a lot of things in this world are about trial and error. You get better by trying something that doesn’t work, so you can get at what does.

VOD or theater. Where, if you had your choice, would you prefer your movies – not just this latest one, but all of them – be seen?

Theater. Without question. These films, and, of course, most films, were made to be seen (and heard) on the big screen, in a theater.

Do all these extra channels and platforms open doors for actors? More work?

I think there are more jobs out there, sure. Are they all quality jobs? No. That’s the thing. Quantity doesn’t mean quality. And, of course, quality is about a great deal more than just money.

If your movie was an answer to a question in a trivia contest what would you like the question to be?

Dream world? What was the highest-grossing horror film of 2017?