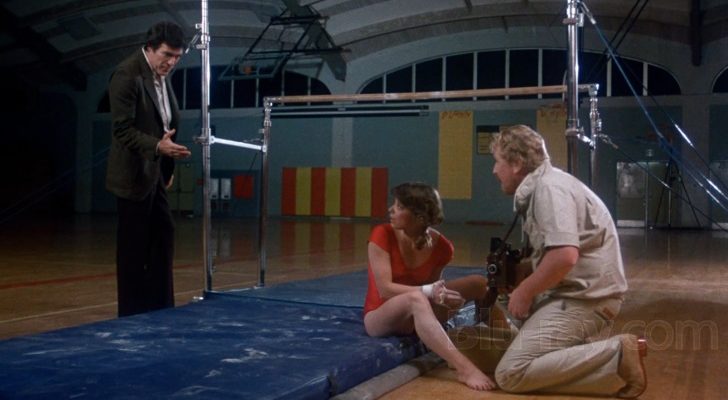 Graduation Day is a perfectly formidable and memorable slasher horror film, and fans of the genre will do fine with this one.

Plot: A masked killer begins murdering students on the school track team after a track runner dies upon completion of a 30 second 200-meter race.

Review: A star athlete collapses and dies immediately after winning a track race. The event is a cataclysmic event for her high school, and as the end of the school year and graduation day approaches, the track team the unfortunate young woman was on is preyed upon by a masked black-gloved killer. One by one athletes are murdered in creative ways (the killer wears a fencing outfit and mask, using swords and sharp objects), and it’s not until graduation day that the bodies start showing up, sending the last remaining suspects careening into a spiral of panic and confusion as the killer is finally revealed. Is it the angry coach? Can it be the dead girl’s pining lover? Or might it be the dead girl’s sister, who happens to be in town for the weekend? Or could the killer be someone else entirely?

Released at the height of the slasher boom of the early 1980’s, Graduation Day stands out for having really snappy editing by Martin Jay Sadoff (Friday the 13th Part VII) and cool direction by Herb Freed. The movie moves at a quick, slick pace and has style to spare. Graduation Day is a perfectly formidable and memorable slasher horror film, and fans of the genre will do fine with this one.

Previously released only in crummy full-frame presentations on VHS and DVD, this film has been presented by Vinegar Syndrome for the first time on widescreen on Blu-ray. Restored in 4K, the picture quality is outstanding, and the bonus material includes two audio commentary tracks and on-camera interviews. If you’re looking for vintage slasher horror for your viewing entertainment this Halloween, you’ve found what you’re looking for right here.