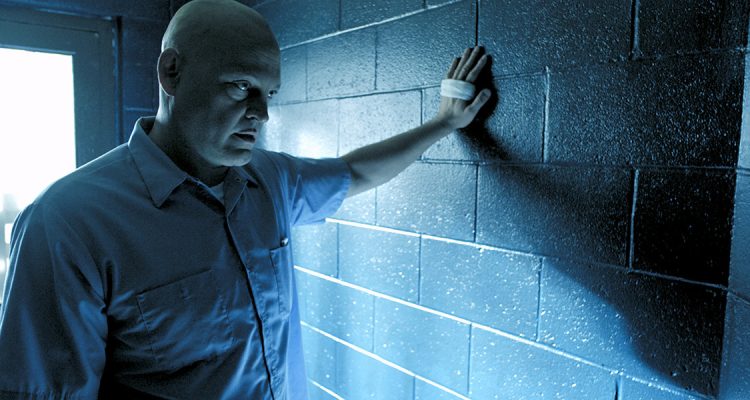 Brawl in Cell Block 99 is another doozy of visceral, over-the-top violence and mayhem, but at its core is an extremely well written script with a great, mid-career performance by Vaughn.

Plot: A former boxer-turned-drug runner lands in a prison battleground after a deal gets deadly.

Review: Former boxer turned tow truck driver turned drug-dealing courier Bradley Thomas (Vince Vaughn in a smashing performance) is a bottled up powder keg of TNT, always ready to explode, but his rage is well contained and regulated. When his wife Lauren (Jennifer Carpenter) tells him that she’s been having an affair he knows he could kill her in a split second, so instead he completely and utterly destroys her car with his bare hands and comes back inside to hash things out with her with careful and well chosen words. They work things out, and a year later things have gotten better for them: She’s pregnant, and he’s making good money running drugs for his drug dealer boss. When he’s assigned a dangerous drug pick up with two watchdogs from another drug dealer, he goes along with it, but when that job goes bad real fast, he makes a choice that gets him arrested and slapped with a seven year prison sentence. Sent to a minimum-security prison, Thomas is soon visited by an emissary of the drug dealer he betrayed, and the message is horrifying: In order to pay back the deficit he’s the direct cause of, he will have to have himself transferred to a nearby maximum security prison and murder an inmate on cell block 99, or his wife and unborn child will be mutilated and killed. Not seeing an option, Thomas beelines it for trouble, maims a few guards, and gets sent to the hellhole prison he’s been forced to go to. And this next prison is indeed a pit of unparalleled degradation: The warden (played by Don Johnson) is a sadistic fear monger who immediately throws Thomas in the most disgusting cell in the joint. Thomas, with no time to lose, gets to the breaking of bones of his guards so that he can get sent further down the line to cell block 99 where only the most horrid prisoners are held. Once there, he’s strapped with a shock belt to be used at his tormentor’s will, and so he will have to somehow get the better of his captors and turn the tables quick or the unthinkable will happen to the only two people on earth who care about him.

S. Craig Zahler’s cinematic follow-up to his incredible horror western hybrid Bone Tomahawk, the contemporary urban exploitationer Brawl in Cell Block 99 is another doozy of visceral, over-the-top violence and mayhem, but at its core is an extremely well written script with a great, mid-career performance by Vaughn, who has never had a role like this. Zahler is turning out to be one of the best filmmakers working today: His penchant for snappy, unique-sounding dialogue and grisly situations is almost glorious, and what’s great about it is that he’s not channeling anybody else. He’s not “the next Tarantino” or the next whoever. He’s the first Zahler, and I can’t wait to see what he does next.