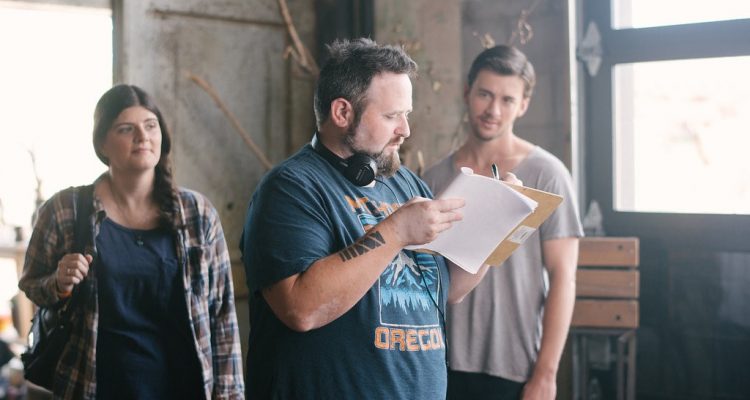 Filmmaker Kevin O’Brien grew up believing “love the sinner, hate the sin” was the only way to go – until he realised how wrong that is. AT THE END OF THE DAY, released on VOD in February, is Kevin’s story.

How long ago was it that you came up with the idea for AT THE END OF THE DAY?

I landed on the central conflict of faith and sexuality early in 2014, as I was re-examining what I believed and how I have treated others throughout my life. By the summer of that year, I knew the story would involve a conservative Christian counselor stuck in a gay support group, and the rest of the story developed from there.

The script… you wrote it, right? I guess the obvious next question is, is it your story?

Yep! I wrote it. It is a fictional version of my story. The story of many people who grew up with a conservative, fundamentalist religious view of the world. I’d been taught things my whole life about the way the world works and what is good and bad. It’s not until I started living my own life, asking questions others didn’t want to ask, and truly listening to the answers that I began to understand how wrong I had been about so many things.

Have any family or friends seen themselves in any of these characters?

Some of the most memorable characters are based on by family and friends, and I wasn’t ever shy about that. I feel that is one thing that gives the film its power and authenticity. These characters were based in reality, facing real situations and very human desires.

Why did you want to tell this story? What’s the goal?

So many goals. First off, I hope that LGBTQ kids growing up in homes where they aren’t fully accepted for who they are can hear that they are whole. They are not broken. They are beautiful. Second, I see this as a form of “We’ve been so wrong.” The church, and it’s followers, have been wrong about a lot of things throughout history. This is the one we must face today, and must publicly apologize for. And finally, I hope that people, like me, like Dave, who were raised in a conservative Christian upbringing embrace the questions. I hope they can watch AT THE END OF THE DAY, and end it with the courage to ask the questions they’ve been fighting for a long time. And when they ask, that they listen to, and value, the answers they hear. This is also bigger than the Church/LGBTQ conversation. Humans have been losing our ability to listen. That road does not end will.

I’m interested in the feedback you’ve received for the film.  Who are the film’s biggest fans?

I would say the biggest fans have been those in the LGBTQ communty who spent part of their life in a conservative Christian school – either middle, high, or college. I’ve heard over and over “thank you for telling my story.” To me, that is how I know I’ve done my job. They see themselves in this story, and it is powerful for them to feel heard and represented.

Were the actors in the film known to you?

Out of the lead characters and the support group, the only actor I had any relationship with prior to filming was Emily Davis (played Erika). I met her in our local PFLAG chapter a year or two before production, and immediately loved her. She makes me smile when I think of her, and she has an amazing collecting of indie board games that I am fascinated with. All the other actors I met through the audition process, and almost all of them are local to central Florida.

How did the film go on the festival circuit? Did that help with distribution?

We played 8 festivals, premiering at Dances With FIlms in Los Angeles, and won 4 awards. Our most prized award is the Audience Choice for Narrative Features at the Tampa Bay International Gay & Lesbian Film Festival. We received a little interest from distributors, but I always felt this was such a specific film with a specific audience, it would do much better with self distribution. That’s the route we took. We do have representation for international sales, and there is much more of an interest than I anticipated outside of the US.