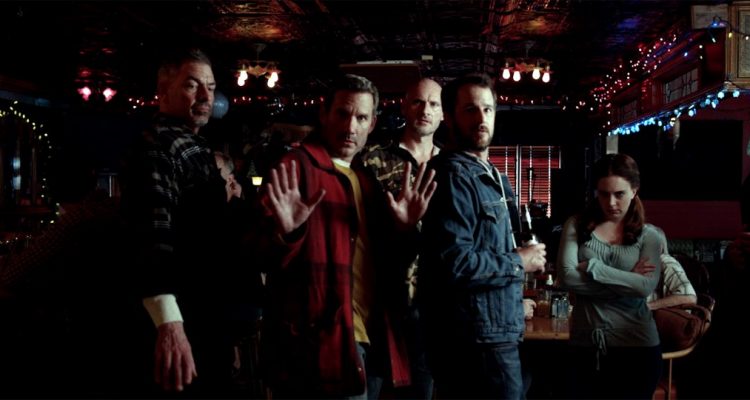 In the tradition of Wrong Turn and The Hills Have Eyes, Uncork’d Entertainment presents Between the Trees – available On Demand this March.

Steve, suffering from a collapsing marriage, invites his three closest friends on a weekend retreat to the mountains only to discover his real troubles are in the trees that surround them. They encounter a deranged killer and their fun weekend becomes a deadly fight for survival.

What a great movie. Can you talk about your influences – I imagine Craven was one?

Good question. You can mix in a few of the usual suspects along with Craven. When you grow up watching this genre I think you just absorb the characteristics of the directors of the time. Definitely the 70s-90s directors styles runs through my veins.

Did you do any research these woods-roving cannibal types? I imagine they do exist out there!?

I grew up in Oregon. I was already familiar with them. Many were my friends lol.

Did the script start with the characters or the storyline?

Definitely the story line. I had no idea what each actor would bring to the film until we started shooting. Once we figured that out, we just adapted the script to fit the characters. That was a challenging but rewarding approach the shooting this picture.

I imagine you toyed with a lot of different looks for the villains?

I didn’t worry too much about that. There are 2 villains in the film. Both equally as ominous but entirely different looks. Just the concept that there were monsters in the woods was enough to make the point. It’s a very claustrophobic film with dual antagonists. It does take some watching to understand the internal and external conflicts but they’re there.

CGI or practical. What do you prefer?

Practical for sure. But I appreciate a mix of the 2. For example when the head is on the ground that’s a mix between both. Look close and you’ll see what I mean. But nothing compares to practical blood, guts and gore. I have close friends in both industries so I appreciate them equally.

What’s your ultimate goal with the film? Kick off a new franchise?

I tend to use cheesy contrived tacked on franchise endings. Not because I plan on doing it but because it’s also an ingredient that most of the classics we all know and love have. It’s a part of the formula and I embrace it maybe to a fault.

If a filmmaker is in it ‘for the money’ are they setting themselves up for disappointment?

Yes! Do it because it’s what you love to do. The rest will all fall in place or it won’t. Enjoy the journey it’s the best part.

Do you juggle your filmmaking career with a day job?

I’m a Voice Over announcer by day so yes I have to juggle. Even when we’re in principal, I have to set up my recording gear at a hotel and make time usually before and after shooting each day. I’m just lucky that I have the luxury of portability. Plus it affords me the ability to do this crazy movie stuff.

If a sequel does come to fruition, what might it be about? Any ideas?

I’ll let you decide but wouldn’t you think JOSH might be involved? He really wanted to go to reno. 😉