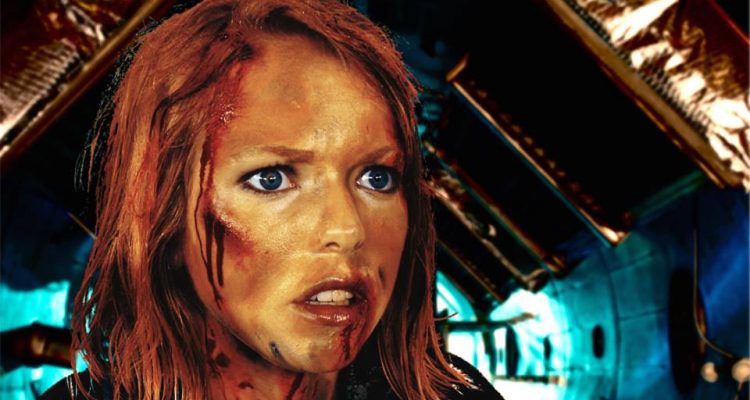 Nathan Phillips
Movie ReviewReviews
June 28, 2017
Synopsis: A elite team of Imperial Empire Galactic Rangers search the ruins of Endor for a cyborg witch called, Leah C6. She is believed to hold data which could destroy a growing rebellion within the Imperial Empire before the Rebels can destroy further planets.
Review:
“Nothing happens in the universe by chance… there is always a purpose.”
Albert Pyun returns to the world of film-making while engaging in one of the most courageous personal battles anyone could possibly comprehend.  Despite having to live with dementia on a daily basis, Albert does something that so many aspiring directors and writers could ever dream of doing: create his own original sci-fi story and make it into a movie.  After over 30 films under his belt, Pyun gives it another shot, all while fighting a serious illness, and with one interesting twist: he embraces it in his telling of the story.  Here, he has given us Interstellar Civil War: Shadows of the Empire, a film which combines sci-fi elements with martial arts in true Albert Pyun fashion, with plenty of plot twists, double turns and more than enough of each to challenge the viewer’s sanity.  We are introduced to the plot, rather extensively, via a triumvirate of nun-like women, who explain the scenario of events to unfold, as if by some divine plan.  As with Star Wars, it’s the Rebels vs the Empire, although in Pyun’s vision, the sides of good and evil are not nearly as clear cut within the respective factions.  The Empress No-Bu (Ellie Church, Space Babes from Outer Space) discusses a plan with Lord General Oward Kazan (Kelly Carlisle, Headless) to seek out the cyborg known as Leah C6 (Cat Cakmis, Bulletface) with the assistance of their top level elite troops, the Star Warfare Rangers, led by Starslayer Burke (Brad Thornton, Kickboxer 4) and accompanied by Corporal Jule Watts (Ashley Campbell, Death to False Hipsters) and Sergeant Lobo Katz (Paul Gunn, Tequila Express), among others.  This cyborg contains valuable intelligence pertinent to dealing with Kindo-Ker (Glenn Maynard, Mondo Yakuza) and the Rebel insurgency to prevent additional havoc from being brought unto the galaxy and the deaths of countless others in the process.
There are two sides to Albert’s approach here.  Interstellar Civil War is, in a word… disjointed.  What is presented within the film itself is some vintage Albert Pyun content, complete with his use of colors, filters and various other effects, including an unfortunately brief all-out battle of not-quite-lightsabers and laser guns, and lots and lots of green screen using a roughly $2M budget that is tiny by today’s standards. Throughout the film, we are shown snippets of stock footage explosions and quotes at intermittent intervals, some of which either hint at future plot points or merely reinforce the horrors of war, and Anthony Riparetti’s musical composition adds quite a bit to the ambience.  We are also given plenty of religious themes and a handful of the characters themselves being instrumental in reinforcing predestination, including some savagery with correlations drawn to the crucifixion of Jesus.  However, the vast majority of this is done via dialogue, which will likely leave your typical action or sci-fi fan rather impatient when not given this story via the action itself or some subtle cinematography.  On the other hand, it is only when you look at this story in the context of Albert’s illness and the support of his cast that you really get to understand and appreciate what both this story and film-making in general is all about.  Brad Thornton (who is also one of the producers) brings grit and toughness to a role carrying what story can be followed, and Ashley Campbell rattles off lines with length and seriousness that would be a challenge for any top level actor.  With the material presented, Albert’s cast treats it all without a touch of ironic self-awareness despite your average mainstream audience likely doing quite the opposite when presented onscreen.  Thornton’s presence and delivery as a leading man are both clearly full of deference to a man who gave him his first acting role, his appreciation for which can be seen in full effect here.  His approach and support for Pyun is awe inspiring.  Despite many of Pyun’s films focusing on the martial arts genre and starring many legitimate martial artists, he shows in making ICW that he is a fighter himself, going up against an opponent where very few could contend in the way he has shown, with tremendous support from his cast and crew in doing what he loves.  While there may be potential here for adjustments, editing, and perhaps a few more fight scenes, Albert has made it clear on social media that this is his movie.  This is the essence of independent film, and while this may not be a professional peak, it is certainly a personal triumph.