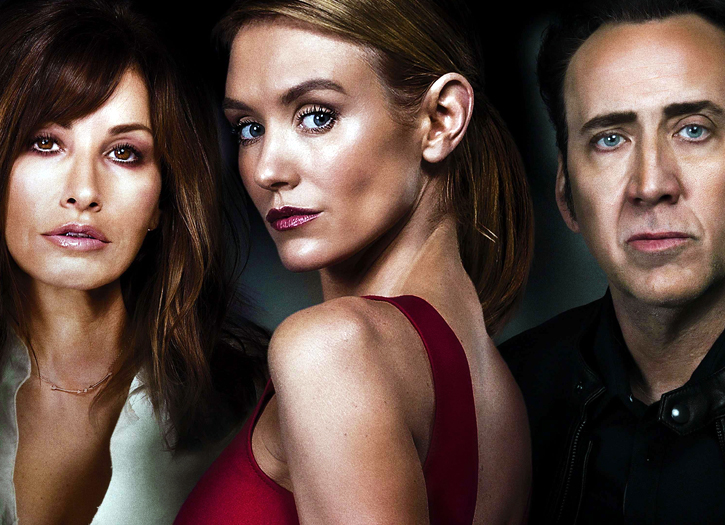 Cage is the best thing about it. The movie is a serviceable entertainment on a basic level.

Plot: A mother looks to escape her abusive past by moving to a new town where she befriends another mother, who grows suspicious of her.

Review: Husband and wife Brian (Nicolas Cage) and Angela (Gina Gershon) want nothing more than to have a son. They have a daughter they love very much, but Angela has had several miscarriages and believes she’s too old to have another child. They hire a surrogate – Angela’s personal fitness trainer – to have their child, but a fateful meeting with another young woman named Katie (Nicky Whelan) shifts events in their lives. Katie is a single mom, having recently fled from an abusive relationship, and she’s trying to start her life over in the same town Brian and Angela live. She befriends them and suddenly she becomes an indispensible part of their lives: first as a housekeeper, then as a nanny, and when their first choice for a surrogate mother dies, Katie is chosen to take her spot. By now, we already know that Katie is nefarious and evil: She killed the first choice surrogate, and has been killing other husbands and wives to reclaim her surrogate children as her own. She’s building her own family built on the blood of men and women who hired her, and Brian and Angela are next on her list…

I’ll preface this by saying I saw Inconceivable theatrically. I see all of Nicolas Cage’s movies theatrically. Trust me: I’ve seen all of them in a theater. Everything from Trespass, Seeking Justice, Stolen, Pay the Ghost, The Frozen Ground, Rage, Joe, The Runner, Dying of the Light, The Trust, Army of One, Dog Eat Dog, USS Indianapolis, and even this. I didn’t even mention the bigger ones like Bad Lieutenant, Left Behind or Snowden. I’ve seen ’em all in theaters because I like Cage and I still consider him to be a hard worker and one of the last genuine movie stars. Even in the smallest movies I feel like he’s trying, and though some of these movies don’t deserve him, they’re all worth watching at least once because he’s in them. Which brings me to Inconceivable. The movie is a serviceable entertainment. It sets out to tell a certain kind of potboiler thriller-type story, and it succeeds on a very small scale. It’s a little boring and the story is flat. The direction by Jonathan Baker is completely pedestrian, and by the evidence here, he might do well on episodic television. In the ’90s this might have played wide as a Hand That Rocks the Cradle riff. Today, it translates as a made-for-TV quality movie or the nearly direct-to-video movie that it is. It’s a little sad, actually, but movies like this don’t play wide anymore. Cage does what he can with a barely written character, and he’s the best reason to watch it. Do you need to own it? Of course not. Why anyone should feel the need to see this twice is beyond me. If you want to study Cage like I do, then watching it twice is one of the only reasons to own it. Everyone else who feels compelled to watch it (and why shouldn’t you?) need only to pay for a rental.

Lionsgate will be releasing a Blu-ray / Digital HD combo pack of Inconceivable on August 29th. The disc includes a director’s commentary (I have no idea who on earth will listen to it), a behind the scenes feature, a deleted scene, and cast/crew interviews.