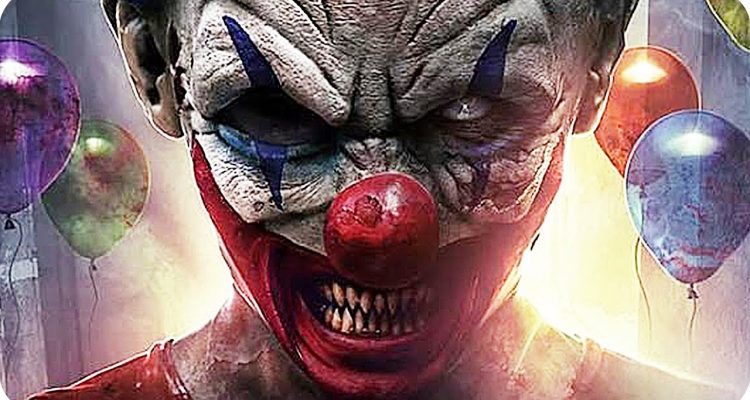 The idea for Clowntergeist didn’t in fact start when writer-director Aaron Mirtes discovered Stephen King’s IT. Nope, this creepy clown tale is in fact inspired by the filmmaker’s own fear of clown statues.

How did you hatch the project?

In 2012, back in high school, I had an assignment in theatre class to get up on stage and tell a story that would move people. I decided to tell a story that has haunted me my whole life, the urban legend of the clown statue. It horrified them and everyone told me to make a movie out of it. I made a short film out of the legend that people really loved, so when I started my first feature in 2014 I kept coming back to this idea of the clown statue. What happens next? Why is he there? What’s his story? Thus, Clowntergeist was born.

What was the initial appeal for you?

The biggest appeal was that, at the time, there really weren’t many clown movies. I’m a huge monster movie fan and I’m also horrified of clowns so I was bummed when there weren’t enough movies for a clown movie binge. I took matters into my own hands and started Clowntergeist. It was a great scale and genre for my first movie, and I figured at the very least I could make something truly fun and enjoyable.

What’s been surprising is how many people realized the same thing and how many clown movies are coming out. I think it’s great! But since I made my project in a vacuum, I think it’s really different from what you’d expect.

Did the project change, if even slightly, due to budget or other creative decisions, as the shooting date approached?

I went in fully expecting to have absolutely no money. My biggest fear is to accidentally make something great. So often we see low-budget masterpieces that were masterpieces on accident. The director says “oh, we only did that because we had no money!” I wanted everything on this movie to be deliberate and intentional. So I went in knowing we’d have a tiny budget. While there were small changes, the movie wasn’t that different in terms of scale, size, and special effects from the first draft.

We had a 12-day shoot in 2014 but were shut down by a forest fire. We came back and shot the rest (along with several additional newly-written scenes) in 2016 over the course of 7 days.

Was it local? Or were parts of it filmed all over?

I’m from Nashville, but we filmed the movie out in Los Angeles. I had a friend in film school and he had connections to cheap equipment and crew, so we got a group of friends and filmed it there. There were several re-shoots and pickups, however, that I shot back in Nashville. Probably between 5-10% of the movie was shot in Nashville.

How different a project do you think this would have been if it were filmed 20 years ago?

20 years ago you couldn’t have done what we did. You would need several hundred thousand more dollars, a place to edit the movie on film decks, a lab to process the film, and probably a film school degree. Nowadays with digital filmmaking and the internet as a source of knowledge you can make the movie in your head a reality if you work hard enough.

It would undoubtedly have been marketed a lot differently then, too. Tell us about some of the marketing activities conducted to promote it.

The movie was originally called “Fear Itself” but as clowns became more popular, the distribution company decided to re-name the movie for marketing’s sake. I jokingly mentioned the name Clowntergeist and it stuck. This was easily the biggest marketing decision we could have made. Once we started posting the poster, the trailer, and other promo materials blogs swooped in and excitedly wrote stories about the movie. Lots of “Clowntergeist is a terrible title” headlines. But when you’re a 22-year-old kid from Nashville with almost no connections to the film industry, this is a huge gift and a huge stroke of luck. Now it’s been contacting as many blogs and publications as possible, getting as many eyeballs on the trailer as possible, and being as loud as we can to get our movie in the public conscious.

Not as important as you’d think. Think about it. How many movie pages like “Clowntergeist Official Page” do you follow on Twitter or like on Facebook? Almost none, right? Talk to non-filmmakers and non-cinephiles. They don’t follow any pages like that! But they do follow magazines, news sites, and movie blogs. Get your movie on there, and they’ll tweet out the article. That’s huge! The Hollywood Reporter, Gizmodo, and Slate tweeting out articles about our movie gave us one hundred times more publicity than our very short lived “Clowntergeist Official Twitter Page”. Instead of making a page for your movie, make a personal page. My personal Twitter, Facebook, and Instagram pages have been tremendous assets in marketing the movie.

How long it takes. I’m trying to be more patient. If it were up to me, I’d make 2-3 movies per year! It took us three years to make Clowntergeist since we were so small and it was our first feature. The movie I’m working on now, by the time it’s done, will have taken a little over a year. It’s a long process.

What was the initial goal of the project, for you. Has it succeeded, in terms of that goal, or is it too early to tell?

My goal was to make a feature film and get it distributed. In terms of that goal I have succeeded. My other goal was to make as fun, thrilling, and scary of a movie as possible. I want people to get a huge group of friends and have fun with it. Scream, laugh, cry, whatever, just have fun with it! It’s called Clowntergeist for God’s sake, it better be a fun movie! In that sense, it’s too soon to tell. Early reviews, however, have been really kind (way kinder than I could have imagined!) and I think people are really going to love the movie.

My biggest hope is that at least a few people who buy the movie make it their go-to movie night movie and watch it whenever they’ve got a group of friends over.

I’m starting production in three weeks on another horror movie and it’s coming out so well! It will be out summer 2018. Beyond that, hopefully more horror! It’s such a fun genre and I’m really hoping to get to the big screen and entertain bigger and bigger crowds.

Clowntergeist out 9/12 from High Octane Pictures.