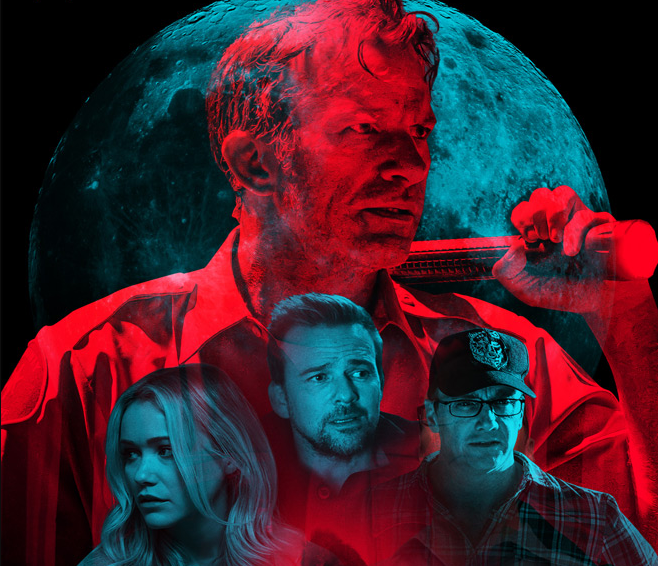 Hunter’s Moon is a rather forgettable affair and I’m disappointed by the lack of werewolf action; it had some interesting ideas but didn’t do all that much that would make me want to watch it again.

Plot: A sheriff makes a strange discovery when he’s gets called to an orchard where three teenage sisters have been attacked by a band of young delinquents.

Review: As soon as I saw the trailer for Hunter’s Moon I knew I had to see it; werewolves AND Thomas Jane? Hell yeah! It doesn’t quite live up to my admittedly lofty expectations but it’s still a fun ride with quirky characters and multiple plot twists.

Some of it you can see coming early on but it just intrigued me straight away. I love Jay Mohr and there is just something off about his character so you know there is more to this family than meets the eye.

I love a short movie but at 81 minutes I felt like it could have been a little longer and I wanted to see more werewolf action. The werewolf (we only see one) was done practically but sadly it just looked like someone in a costume but I’ve seen worse.

It also is rather slowly paced with nothing much happening for the majority of the movie; it never gets all that tense or exciting because we don’t care about anyone.

I feel its flaws are mostly due to budget restrictions and Thomas Jane elevates it a little. Michael Caissie writes and directs and has created some cool ideas so it will be interesting to see where he goes next.

Overall, Hunter’s Moon was rather disappointing lacking in werewolf action which is what we’re watching it for; it has its moments and Thomas Jane makes anything watchable but I’d say you’re best to avoid this and go watch American Werewolf in London again.