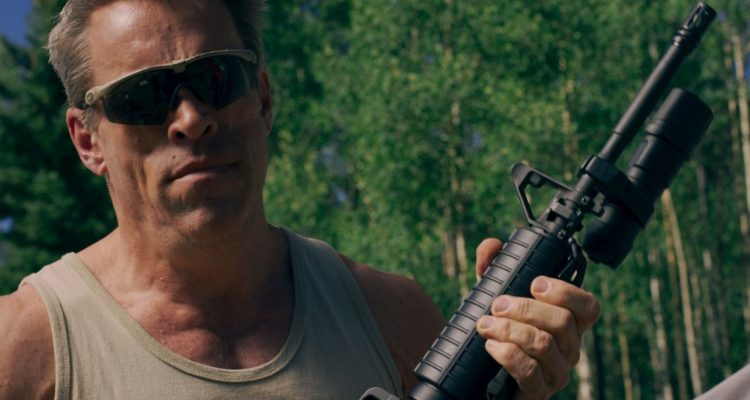 A movie like Hoax with all the right ingredients should entice, entertain, and have some fun surprises, but Hoax stumbles almost as soon as it’s let out of the gate.

Plot: An investigative team travels deep into the remote Colorado wilderness after a group of young campers are viciously murdered by what may be Bigfoot.

Review: A disgraced TV show producer named Rick Paxton (Ben Browder playing a thankless role) gets one last shot at redemption: To prove that Sasquatch exists, and fashion a reality-type Discovery show around it. He gathers a team of ex-military survivalists (one is played by genre favorite Brian Thompson), scientists, a doctor, and the father of a young woman who might’ve been killed or abducted by Bigfoot in a recent event chronicled in the first scene of the film where a group of young, horny campers are decimated by a creature of some sort. When the TV crew arrives in the mountainous Colorado wilderness region where the last Bigfoot sighting took place, the crew is systematically picked off by either Sasquatch or … something else. Paxton will soon discover much more than he ever could have bargained for, and his redemption will take quite a lot more effort than he could have imagined.

A promising concept framed around both a Sasquatch subgenre niche and some Wrong Turn-type shenanigans, Hoax is a frustrating film for a number of reasons. While it has some familiar genre faces like Thompson and Browder (I’m a big fan of Farscape), these guys are never used to the best of their abilities, and their appearances are mainly for marketing reasons, and not to serve the film itself. For horror fans and for fans of Bigfoot pictures in particular, Hoax is a big disappointment for being more of a tease than something that delivers, and it’s confusing when the big twist is revealed because then the movie double backs at the last second and tries to align itself to the viewer’s expectations. It becomes a cruel and lackluster (and very unimaginative) hybrid of several different horror subgenres, but in this case it feels incorrect because of the way it’s all handled. It’s never fun the way it should be, and even the brief titillation in the opening scenes is mishandled and by-the-numbers. A movie like this with all the right ingredients should entice, entertain, and have some fun surprises, but Hoax stumbles almost as soon as it’s let out of the gate. The one redeeming quality from the film is the score by veteran electronic composer Alan Howarth, who worked with John Carpenter for many years. From co-writer and director Matt Allen.

Hoax is now available on Blu-ray from Epic and Dread, and has a wealth of special features on the disc, including two audio commentaries, trailers, and more.