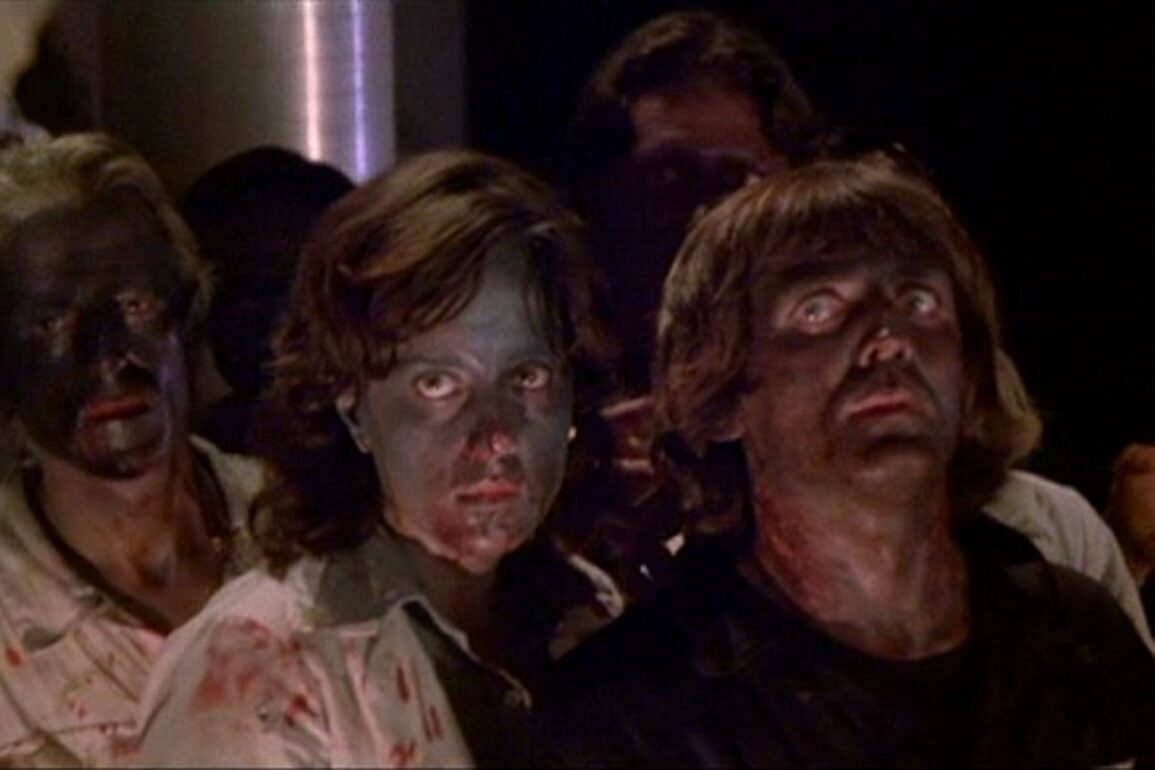 It’s great to have these post-apocalyptic movies on Blu-ray. The disc looks great!

Plot: HELL OF THE LIVING DEAD: An accident at a chemical plant unleashes a horrific virus, and an elite SWAT team is sent to New Guinea to investigate. But when they arrive on the hellish island, they discover a plague of flesh-eating zombies. RATS: NIGHT OF TERROR: In the year 225 A.B. (After the Bomb), a group of post-apocalyptic bikers discover an abandoned research laboratory filled with food, water… and thousands of rats. But these are no ordinary vermin; these are super-intelligent mutant rodents with a ravenous appetite for human flesh.

Review: Blue Underground has recently released a pristine looking blu ray that contains a double bill of “Vincent Dawn” (a.k.a. Bruno Mattei) Italian grindhouse films, both of which will make your stomach churn.

Hell of the Living Dead is fun, but typical, midnight madness for those seeking a gut busting zombie action film. The zombie apocalypse gets going (origins begin at a chemical plant after a virus is unleashed), and a bunch of SWAT soldiers retreat to New Guinea to trace the destruction of where the virus began. Armed with machine guns and itchy trigger fingers, the SWAT commandos taunt the cannibalistic natives, while their tagalong female reporter (played by pretty Margit Evelyn Newton) disrobes and goes native to get answers. It doesn’t take long for the natives to become full-on raging (but slow moving) zombies, and the idiotic SWAT guys get cornered and die one-by-one. The final scenes where the reporter is eaten and facially clawed had my jaw dropping. Other scenes of world leaders trying to figure out how to stop the world from ending aren’t that exciting.

Filled with creepy stock footage of native hoodoo shenanigans and frumpy looking actors making bad jokes, this Bruno Mattei action-lite end of the world hokum should appeal to those yearning for Goblin-scored pasta-pocalypse sweetness, but casual fans of the zombie genre will be bored. There’s nudity, graphic gore, and a niggling sense of Mondo-cane-ish melancholy that taints it.

Rats: Night of Terror is full of terrible dialogue, bad dubbing, and women (all three of them) who scream incessantly. It takes place 225 years after nuclear bombs destroyed the surface of the Earth. After all this time, a group of rag-tags emerges from hiding underground (where everyone has been living for hundreds of years) and get on motorcycles and ride until they find an abandoned research lab. There they find food and clean water, an arboretum, and thousands of hungry rats who ate the people who’d worked there. The rag-tags have stupid one-word names that pretty much describe their look or character: the tech guy is Video, the slimy, villainous guy is called Lucifer, and the only black actor in the movie (Janna Ryan, a.k.a. Geretta Geretta) is named Chocolate! Needless to say that over the period of a few hours, all but two of the characters get eaten by the rats, and when the two survivors emerge from the lab, they are confronted by a band of men wearing inoculation suits and masks. When the masks are taken off, the men are revealed to be mutant creatures. Chocolate, one of the survivors, screams for a while and the movie ends.

Appropriately paired with each other, both films are for the same blood-hungry demographic, and while these films are certainly action hybrids, they’re best for consuming on empty stomachs. Blue Underground’s blu ray is a marked improvement over the Anchor Bay DVD’s from once-upon-a-time, and at a reasonable price, it should be picked up for fans of either or both films. For more information, please visit: www.blue-underground.com.