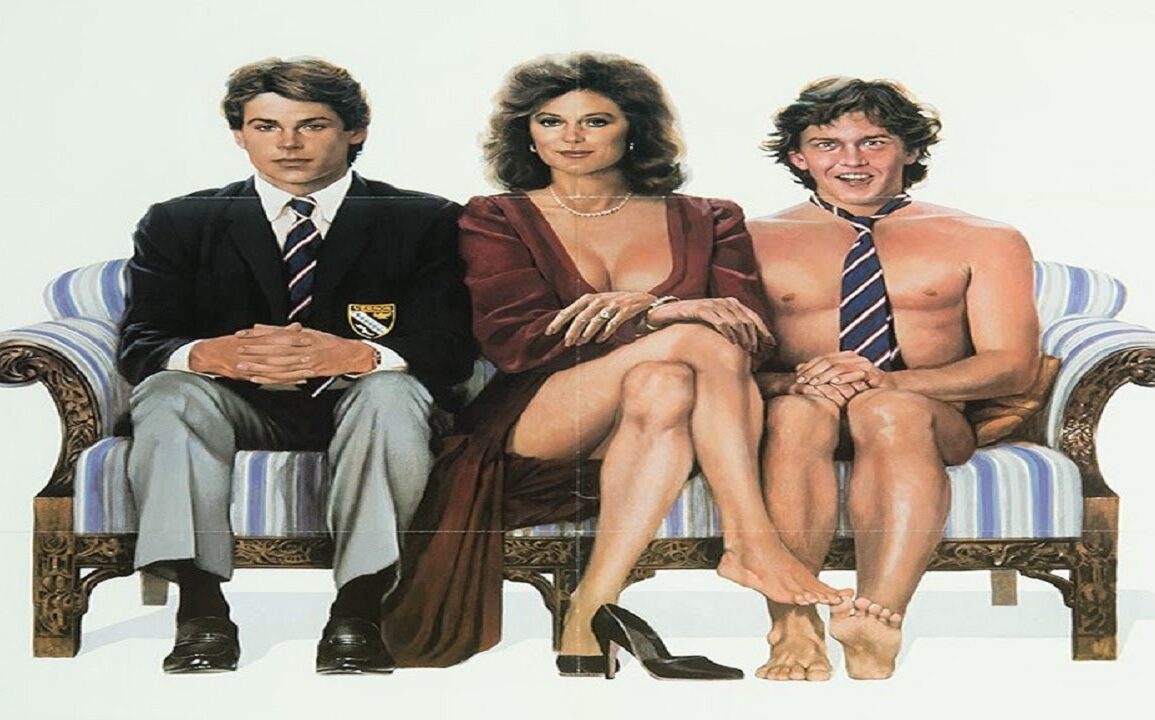 It’s worth seeing just to watch Rob Lowe and Andrew McCarthy beat the crap out of each other.

Plot: A young boy in private school spends one crazy night out, but soon realizes the woman he hooked up with is not who he expected.

Review: The older woman / teenage boy love affair subgenre was a popular one in the 1980’s with sultry (and awesome!) titles like My Tutor, Homework, and Private Lessons, but where those films (which were pretty great) hinged on melodrama, the 1983 movie Class really reached for greatness with its interpersonal relationships between its two central characters – 17-year old country boy Jonathan (played by first timer Andrew McCarthy who would hit big a few years later with Pretty in Pink) and preppy pretty boy Skip (Rob Lowe, later in St. Elmo’s Fire with McCarthy), who both find themselves as roommates at a high class prep school. Skip, born with a silver spoon in his mouth and with a natural bent towards attracting the opposite sex, takes a shine to naive Jonathan, who is a precautious virgin, but with a profound sense of intellect. As Skip encourages Jonathan to go into the big city to seek out the allure of strange company (i.e. a loose woman), Jonathan ends up in a gin joint and by some miracle ends up going to a hotel with a gorgeous older woman named Ellen (played by the voluptuous beauty Jacquelin Bisset). Ellen, who sees something in Jonathan than no one else seems to see, gives Jonathan the time of his life over the course of several weeks before Christmas, but when she finds out that he’s only 17, she bails on him, leaving him with a broken, confused heart. In a wild and crazy turn of events (that play out believably), Skip invites his roommate to his home for the Christmas holiday, and when he introduces him to his mother, it’s Ellen! Clearly, fate has brought calamity upon the heads of young Jonathan and the neurotic Ellen, who both must contend with the fact that fate is a cruel trickster. When Skip finds out the truth, he and Jonathan get into an epic brawl that serves as the satisfying climax of the film.

An emotionally charged and nuanced “teen sex” film that really serves its coming-of-age theme, Class isn’t quite in a “class” of its own, but it’s certainly a memorable entry in the genre, and it’s worth seeing just to watch Lowe and McCarthy beat the crap out of each other from one end of the prep school campus to the other, culminating in a beatdown in their dorm. The comedy comes in all shapes and sizes, courtesy of co-stars John Cusack, Alan Ruck, and Virginia Madsen (who has a memorable nude scene), and a subplot involving flushing tons of marijuana down the toilet and cheating on the SATs, but the crux of the film hinges on the dynamic between Skip/Jonathan/Ellen, and the film works, especially when it all blows up in their faces. From director Lewis John Carlino (who, incidentally wrote The Mechanic with Charles Bronson).

Olive Films has just released a splendid looking Blu-ray of Class, which is a marked upgrade from the old MGM DVD, with improved picture and sound quality. It’s well worth the upgrade and a recommended purchase for your home video library.