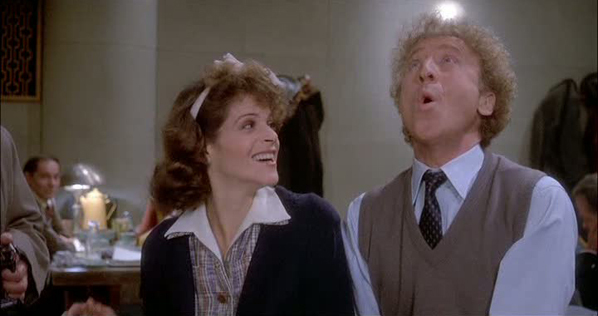 Plot: Larry Abbot, speaker in the radio horror shows of Manhattan Mystery Theater wants to marry. For the marriage he takes his fiancée home to the castle where he grew up among his eccentric relatives. His uncle decides that he needs to be cured from a neurotic speech defect and exaggerated bursts of fear: he gives him a shock therapy with ghosts.

Review: When news broke that comedic genius and beloved actor Gene Wilder passed away this week, it seemed ironic and yet fitting that Kino Lorber sent me two remastered Blu-ray screeners of some of Wilder’s lesser-regarded films The Adventures of Sherlock Holmes’ Smarter Brother and Haunted Honeymoon, and so on the day he died, I watched Haunted Honeymoon for the first time in 30 years. I saw it theatrically when I was a boy, but it didn’t really resonate with me. I was either too young to “get it,” or I’d expected a lame brained laugh riot like the Police Academy movies, and the memory of the film languished for decades until I watched it anew. The movie is a sweet natured ode to the radio days of early Hollywood, and Wilder (who co-wrote and directed) plays a neurotic voice actor named Larry Abbot, while his real-life wife at the time Gilda Radner plays his fiancé Vickie. They plan to be married at Abbot’s childhood estate, a spooky looking mansion with more empty rooms than creaky floorboards. Abbot’s Aunt Kate (a hilarious Dom DeLuise in drag) embraces her long lost nephew, and promptly declares that a werewolf is stalking the grounds, and things only get more hilarious and hairy from there. As it turns out, the radio station Abbot works for has hired a doctor to perform scare therapy on their top star to cure him of his neurosis, and as Abbot’s family sets him up to be scared by ghosts, ghouls, and a werewolf, Abbot’s honeymoon is haunted for sure!

While the movie underperformed at the box office, Haunted Honeymoon conjures up some serious laughs, but on the whole it’s pretty genteel and harmless. It’s neither super scary or super hilarious, but it’s both in fits and spurts. Wilder was a lovable guy on screen, and watching it after his death made the movie a little more poignant.

Kino’s brand new HD transfer of Haunted Honeymoon is gorgeous. It looks better than it’s ever looked on home video for sure, and fans of Wilder’s should make this a purchase in the near future.