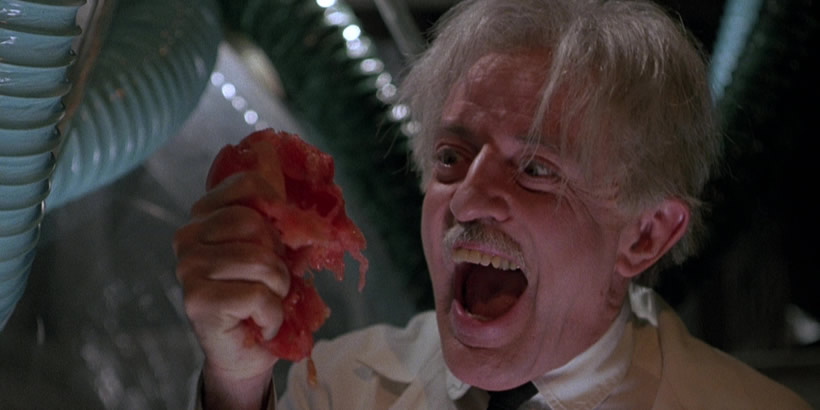 It’s a movie that didn’t necessarily deserve a great Blu-ray edition, but fans of the series will get a kick out of it.

The story goes something like this: After the great tomato uprising of ’78, humanity has a major fear and prejudice of tomatoes. And pizza sauce and ketchup. If you say tomato in a crowded place, you cause a riot. Pizzas are made with chocolate and other base sauces, and vegetables in general cause unease. A mad scientist named Professor Gangreen (John Astin) creates a formula to transform tomatoes into people, and he creates a gorgeous experiment in Tara (Karen Mistal), who is like that supermodel the kids created inWeird Science: She’ll do anything at the drop of a hat, but she has feelings. When Gangreen sends her out into the world to be the first wave of the next tomato invasion, she ends up falling in love with a pizza delivery guy named Chad (Anthony Starke), who with his buddy Matt (George Clooney in an early role) is pretty much just skating by on life in the post-tomato invasion world. After realizing he’s landed his ultimate dream girl, he’s crushed when he eventually realizes that she’s the dreaded fruit/vegetable the whole world has come to fear, and so he’ll have to find a way to change her fully into a human while retaining her tomato-loving heart in the midst of the next tomato uprising.

Like a Mad Magazine comic strip come to life, Return of the Killer Tomatoes is nonsensical and ridiculous, and of course it’s entirely aware of this, and so it goes for broke (while still retaining a PG rating) with in-jokes, breaking the third wall, blatant product placements, and an overall sense of throwing everything at the viewer in the hope of a laugh. Once in awhile you’ll chuckle, but for the most part it’s a big joke that doesn’t work. Arrow Video put their best resources together and produced a definitive edition of the film, so if there are any hardcore Killer Tomatoes fans out there, this is the time to snap up a copy. It’s fully loaded with a 2K restoration, a brand new audio commentary by director John De Bello, a new on-camera interview with star Starke, and more features. I’ve become a huge fan of Arrow’s label for restoring and releasing great cult films on Blu-ray, but this release makes me scratch my head a little bit simply because I never realized anyone was craving a Killer Tomatoes Blu-ray, but here you guys go.