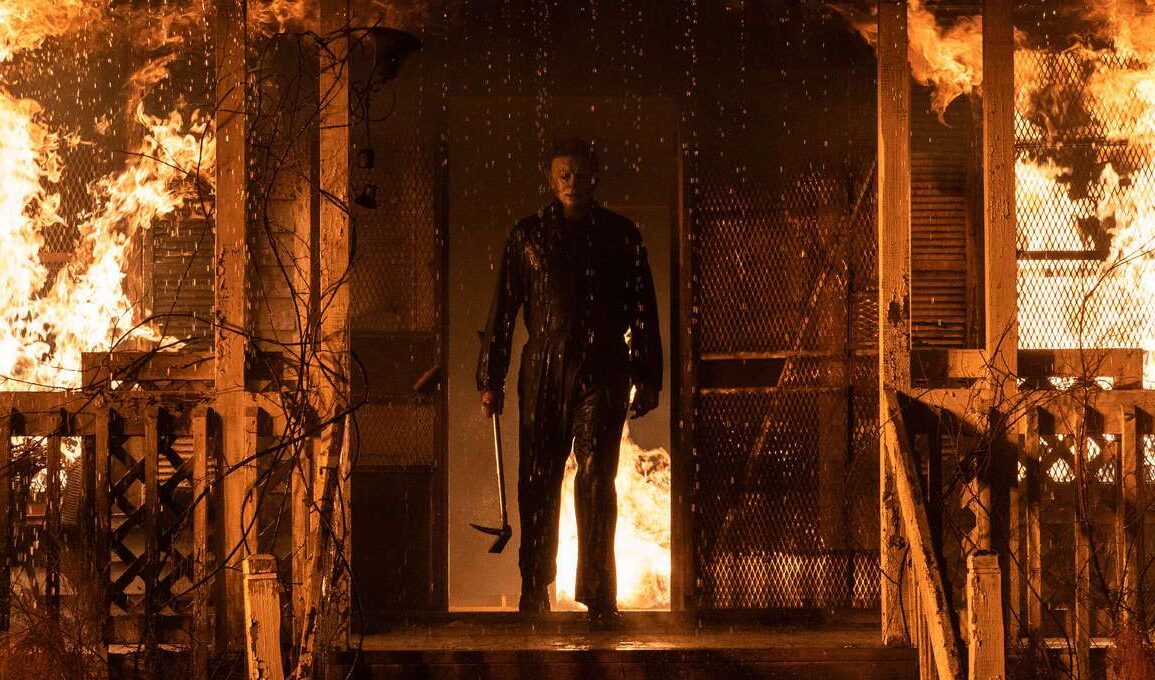 Halloween Kills is one of the best entries in the franchise with Michael Myers more vicious than ever and an interesting new angle where the town of Haddonfield rises up to do battle with him making this a must see for slasher fans.

Plot: The saga of Michael Myers and Laurie Strode continues in the next thrilling chapter of the Halloween series.

Review: I go into some pretty big spoilers here so if you want to go into Halloween Kills not knowing what happens then read no further.

When the title of your movie is Halloween Kills you’d better be damn sure it has the requisite bodycount and I’m pleased to day that the latest entry in the stabathon that is the Halloween franchise delivers on that front and may well be the best sequel in the series or at least up there with part II.

Continuing on right where the 2018 Halloween left off Laurie Strode (Jamie Lee Curtis) and her family are in the back of a truck escaping her burning compound thinking Michael Myers has been defeated… the fools! As if a puny thing like fire could defeat the greatest slasher of them all. Some doomed firefighters show up but flames are the least of their problems as Michael is waiting for them as you’ll have seen from the trailers.

Before we continue we need to discuss the greatness of the opening 15 minutes which felt like an extension of the first movie where we even somehow have the return of Donald Pleasance as Dr. Loomis. I’m sure that must be CG trickery, but you can never have too much Pleasancing in your movie and I nearly squealed with excitement when I saw him. We explore some of the other characters with the primary focus on a younger iteration of Will Patton’s Officer Hawkins to show how he blames himself for Michael’s reign of terror. This was maybe my favourite scene of the film but there are so many to choose from. Gorehounds are going to love every second as this is Michael Myers at his most sadistic; the kills are the goriest of the entire franchise and Michael has never been so merciless.

I love the idea that the town of Haddonfield is sick of the curse that is Michael Myers so they all decide Evil Dies Tonight, grab their pitchforks and go hunting for Michael. Things don’t go as planned (as mob rule usually doesn’t) and Michael essentially turns the entire town into monsters just like him.

Anthony Michael Hall’s Tommy Doyle kind of takes over from Laurie this time as she is in hospital healing from the events of the 2018 movie. Doyle is the leader of the town mob and believes the time has come to destroy Michael once and for all. Hall excels and nearly steals the movie but we never forget that Jamie Lee Curtis is the ultimate scream queen and will be there for the final showdown in Halloween Ends.

I still don’t think Allsyon (Andi Matichak) is especially interesting but she is sympathetic enough and is going to be right there with Laurie when the final battle occurs as Michael has taken nearly everything from her.

There are so many throwbacks to the original as well as some of the sequels so fans should enjoy every blood-soaked minute. I suppose a criticism you could give is that the kills are especially vicious considering how not gory the 1978 original was but we don’t really do subtlety in today’s movies so instead let’s just wipe out the entire town!

We were cheering in the aisles especially for the finale which is a highlight for the entire franchise and never lets up making for a far more satisfying entry than the 2018 sequel/reboot.

John Carpenter returns to provide the score which is as fantastic as ever with some added creepy choir just to make it even more incredible.

This is a wild ride never letting up the pacing for a second so don’t expect much in the way of dialogue, it’s really just people shouting while Michael walks around casually murdering everyone.

Overall, Halloween Kills is one of the best entries in the franchise and I went in with no expectations. There are brutal kills, wonderful callbacks to the original and it sets up Halloween Ends to perfection.