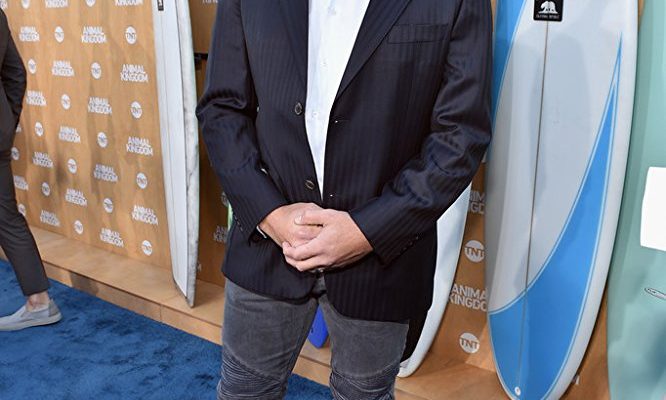 Griff Furst, better known as an actor (his credits include Banshee, The Founder, Focus and The Magnificent Seven), talks to us about his directing venture Cold Moon, which hits theaters and VOD October 6.

Cold Moon is based on the novel Cold Moon Over Babylon by the late Michael McDowell, author Beetlejuice and The Nightmare Before Christmas.

In a sleepy southern town, the Larkin family suffers a terrible tragedy. Now the Larkin’s are about to endure another: Traffic lights blink an eerie warning, a ghostly visage prowls in the streets, and graves erupt from the local cemetery in an implacable march of terror . . . And beneath the murky surface of the river, a shifting, almost human shape slowly takes form to seek a terrible vengeance.

Some actors, for one reason or another, are forced to direct films outside of their personal interests or preferred genre. Have you been lucky enough to only work within the genre, and your preferred type of film?

Ha.  No.  If I take on a gig, I direct it like it’s my passion, but I’m a business man as well as an artist, so as much as I would love to only work on pictures that are in precise alignment with my own artistic sensibilities, that’s rarely the case.  Cold Moon is actually the first feature I’ve directed that entirely originated with me.

How long ago did the film kick-off?

Right after I read the book. Before the screenplay was even done. We had already decided this would be our next movie and we were in preproduction

Beautiful locations. Where did it shoot?

Being an indie, most filmmakers tend to have to wear more hats on their films than usual. Was it a bit of a multi-hat wearing juggle for you at times?

Oh yeah. I have a whole coat closet full of hats from this movie

It’s a heavy movie with a heavy subject matter, does that affect your mood? Easy to switch on and off at the end of the day?

There’s a few scenes that were treated sensitively while shooting, but it wasn’t like we were shooting Schindler’s list.

What about your actors? They struggle at all with anything?

Josh Stewart is a much better guy than Nathan Redfield is. But he’s also a tough SOB so I wouldn’t say struggled. There was just a few scenes that were uncomfortable, but acting isn’t a comfortable thing to do in general.   Candy Clark struggled a bit, only because she’s a bit method, and her role, Evelyn Larkin, is a pretty brutal role for an actor that likes to feel things. But even though she had to be in despair 12 hours a day for a month, she crushed it.

How long has it been since it was completed?

It’s been complete for about ten months it started playing festivals at the end of 2016. We changed a few things since then, but nothing major.

Did it turn out as you envisioned it would?

I probably spent 10,000 hours on this project. I don’t quite remember how I envisioned it before. But I know that I love it now.

Were any scenes of yours lost in the editing room? Any moments you unfortunately had to let go? I imagine editing is a hard one.

Tons. The original edit was about 30 minutes longer. Luckily, I had some solid mentors help me lock the final Picture

If your movie was an answer to a question in a trivia contest what would you like the question to be?

What happened to the bodies?