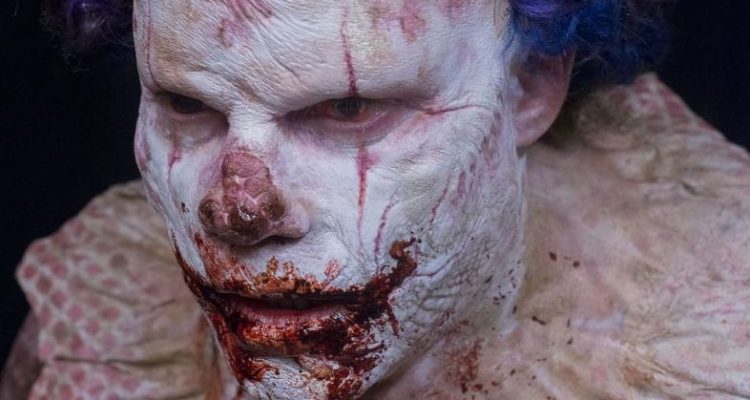 Great horror effects and fans should eat it up; it has a decent making of special feature which is worth checking out.

Plot: A loving father finds a clown suit for his son’s birthday party, only to realize that it is not a suit at all.

Review: There’s nothing more endearing than a father who goes out of his way to make his children happy, and when hard working real estate agent Kent (Andy Powers) finds out that the clown he’d hired for his son Jack’s (Christian Distefano) birthday didn’t show up, Kent thinks he’s in luck when the abandoned house he’s just put on the market yields a closet full of odds and ends … including what he believes is a vintage clown outfit. He dons the strange costume on (it comes complete with a wig, nose, and a body suit that covers the entire body), goes to his son’s birthday and has a great time entertaining the kids … but he makes the mistake of leaving the suit on overnight. When he wakes up, he tries to take the wig and nose off, but to his frustration not only do they not come off, but he can’t seem to get the suit off either. At first it’s like a bad joke: He goes to work looking like a clown, but after an entire day of thinking he must be crazy, he’s exasperated by the time his wife gets home. They try using a saw and pliers to tear it off, but that has a near-fatal consequence when half of his nose is ripped off. In panic mode, Kent tries everything he can to get the blasted suit off, but to add to the sinister dread that begins to creep over him, he begins transforming into … something else, exhibiting a frightening visage, in addition to behavioral changes (like an insatiable hunger and a propensity to kill and eat children!). His wife Meg (Laura Allen) seeks help, finding an eccentric man named Karlsson (Peter Stormare), who actually knows exactly what the clown suit is because he encountered it once before, and it’s up to she and him to stop Kent before he completely transforms into a hideous, demonic entity, hellbent on devouring the children of the world.

Grim, but satisfying, the Eli Roth-produced Clown manages to pull off an incredible feat: By tackling some button-pushing subject matters, it has a scary edginess that dares you to watch, while it also manages to be shockingly restrained and careful in how it treats the subject matter, making sure to use clever editing and convincing performances to pull off its agenda. It’s a pretty solid horror film with incredible make-up effects, and hardened horror fans should have a satisfying experience with it. It’s ain’t no picnic, but it certainly does what it sets out to accomplish. Directed by Jon Watts (Cop Car).

While Clown was unfairly relegated to sitting on the shelf for over two years, it was released theatrically for a week in US theaters earlier this summer (which is how I saw it the first time), and now Anchor Bay and Dimension Films has released it to home video on both Blu-ray/Digital HD and DVD. Good horror films like Clown are few and far between, and catching it in theaters wasn’t an easy task, so home video is the best way to enjoy it. The Blu-ray has a special feature in the way of a “Making of” feature, which is worth taking a look at.