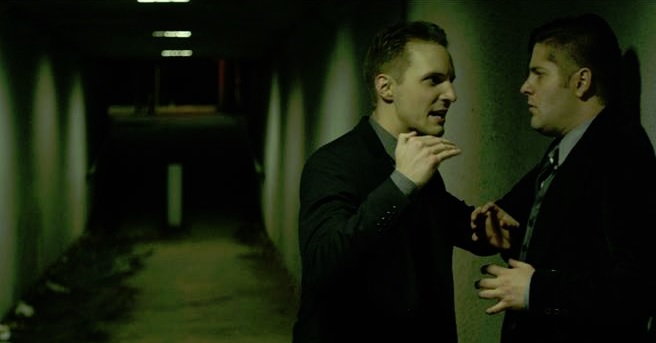 How did Blood Brothers come about, sir?

Jose Prendes(the film’s writer/director) and I have been friends for years and we have worked together many times, So he calls me one day and says “I want to do a movie based roughly on the Leopold and Lobe murder case by way of David Lynch and I want you and Jon to star as the psychotic brothers. I was in before he finished talking. I’m honored to have been part of the film.

What makes your character tick?

Charles is a weird one. Very shy (at first) and timid, but once the blood starts to spill, he does a complete 360. He’s also a momma’s boy and when Barbara Crampton is your mom, you better do what she says…no matter what.

What do you have in common with Charles?

I mean, he’s a complete psychopath….so, not really haha. In all seriousness, I’d say that as far as our similarities are concerned, we both love going to the movies, we hate people who talk during movies and we both love Barbara Crampton.

How was it working with legends like Babara and Ken Foree?

It’s hard to put into words. When you grow up loving From Beyond, Dawn of the Dead, Castle Freak, Re-Animator, The People Under The Stairs and everything else these wonderful people have done and you wind up sharing the screen with them, it’s pretty surreal. Working with Ken was so awesome, the man is a damn good actor and completely dedicated to the film. Even behind the scenes, Ken was one of the sweetest and funniest guys you could ever hope to meet. Barbara is the most amazing woman I have ever worked with, I can’t show enough love for her. Total professional, badass, heart of gold lady right there. Laying in bed holding Barbara, acting together and singing to her was one of the weirdest and most awesome moments of my whole life. As for Sean Whalen, what a good dude. He is the most down to earth, funny as hell guy. I love Sean and we became really good friends and have worked together a few times now. I could go on, but it would take forever. Working with these legends of the genre has left me feeling incredibly grateful and thankful that I even got the chance to share the screen with them. I loved working with them all so much.

And how is Jose Prendes, your director? An ‘actor’s director’?

Jose is more than just an actor’s director. He is the glue that keeps it together throughout. He is one of my best friends, but I can honestly say he is the best director I have ever worked with. He really sees the film in his head and how he wants the performances to come across. It’s never easy being a director because you have so much responsibility for your entire film, as well as the cast and crew helping you bring your vision to life. Whenever I or anyone on set needed guidance, he was there for us. I think the man has a lot of raw talent and this film really shows what he is capable of. He made some choices visually with the DP(director of photography) Kyle Stryker that left me in awe. Just the driving scene in the opening credits is beautiful stuff.

Do you gravitate towards horror?

I love all genres, but horror is just that one genre you can do ANYTHING in. You can be out of your mind, scared to death, hilarious, terrifying, covered in blood…the possibilities are endless and that really makes working in horror such a great job. I love that you can safely dip into the darkest of scenarios with people you trust and make a piece of art together. Becoming Charles for the film was tough on me because I had to do so much in character, but in the end, it was so liberating to be so far from myself in a horror film like Blood Brothers.

What have you been up to in recent times?

Lately, I myself have been directing a ton for Eli Roth and Crypt TV. Next up is getting a feature off the ground but till then you can all keep your eyes peeled for GET THE GIRL written and directed by Eric England(CONTRACTED), story by yours truly, and I even have a fun scene in the film.

Blood Brothers is in theaters and on VOD December 2