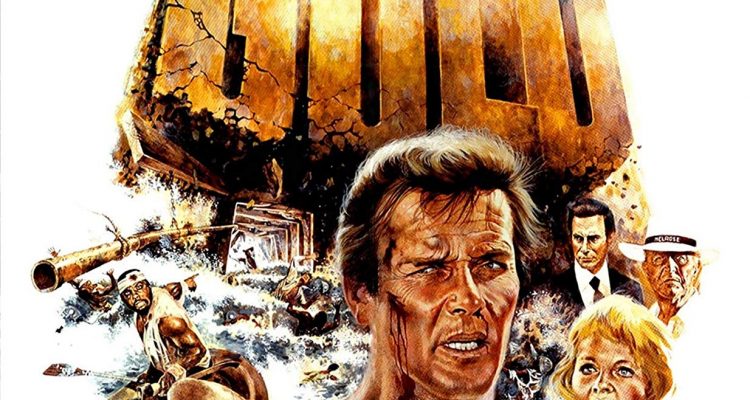 A slow moving and overlong conspiracy thriller with a disaster that frames it, Gold is too lethargic to be gripping and has too much fat around its middle sections to be a choice viewing pleasure.

Plot: Rod Slater is the newly appointed general manager of the Sonderditch gold mine, but he stumbles across an ingenious plot to flood the mine, by drilling into an underground lake, so the unscrupulous owners to make a killing in the international gold market.

Review: A gold mine in South Africa produces buckets of gold daily, but at the cost of the lives of the miners deep underground. The shareholders of the mine plot a terrible scheme: They’ll have the mine rigged to collapse, thus shutting off the gold supply for a few days around Christmas, resulting in a skyrocketing of the value of gold. They’ll all get even richer, but first they’ll need to deal with the manager of the mine, the honest and brave Rod Slater (Roger Moore just after Live and Let Die). When the disaster strikes, Slater bucks their ruse and dives into the mine like a hero, saving as many lives as he can and correcting the horrible catastrophe as swiftly as possible.

A slow moving and overlong conspiracy thriller with a disaster that frames it, Gold is too lethargic to be gripping and has too much fat around its middle sections to be a choice viewing pleasure. Roger Moore is good in a role he’s suited to play, but the movie doesn’t require much of him. Ex-editor Director Peter Hunt (who directed the exemplary 007 film On Her Majesty’s Secret Service) spends too much time on long, drawn-out scenes to make this movie suspenseful, and the script by novelist Wilbur Smith isn’t as compelling as it should be. Still, this is a very adult movie, despite its “PG” rating, with sex, gore, and violence.

Kino Lorber’s new Blu-ray of Gold presents the movie for the first time in HD, and while the movie looks and sounds nice, it’s just not a great title to own.