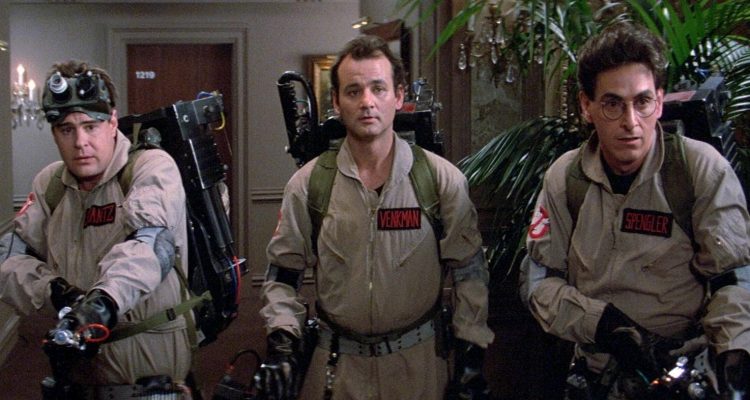 Ghostbusters remains a classic film with one of the most likeable casts in cinema history, a unique story and amazing visuals.

Plot: After the members of a team of scientists (Harold Ramis, Dan Aykroyd, Bill Murray) lose their cushy positions at a university in New York City, they decide to become “ghostbusters” to wage a high-tech battle with the supernatural for money. They stumble upon a gateway to another dimension, a doorway that will release evil upon the city. The Ghostbusters must now save New York from complete destruction.

Review: With the controversial reboot of Ghostbusters coming later this week I thought now would be the perfect time to revisit the original (and best) Ghosbusters of them all.
This was a movie I would watch pretty much every weekend growing up; I literally reached the stage where I would go years without watching it because I knew every single scene verbatim.

I rewatched it when it was on TV a few weeks ago and everything still holds up; the sarcasm of Bill Murray’s Venkman, the sheer likability of Dan Akroyd’s Ray, the healthy cynicism of Ernie Hudson’s Winston and oddball personality of Harold Ramis’ Egon.

It all just works and it’s because the actors all have on-screen chemistry and you believe in what they’re doing. The script is tight with plenty of subtle humour as well as laugh out loud moments.

The special effects are still spectacular and the Stay Puft Marshmallow Man always creeped me out… and frankly still does to this day.

It’s funny how fans of the original are getting lambasted for their opinions of the reboot and being called “misogynistic” by the filmmakers but the simple fact of the matter is it’s got nothing to do with the all-female cast (at least for me); it just doesn’t look very funny. The “humour” in the trailers is just loud and crass which isn’t what the original movie was; I do find I’m feeling my age though these days as I don’t find most modern comedy funny.

Anyway, for me this is Bill Murray’s movie; his dry wit and awkward relationship with Sigourney Weaver’s Dana Barrett is believable and they feel like real people you can identify with.

The story was unlike anything that came before and felt truly original; there was just the right amount of comedy but not enough to dilute from the impending threat from Gozer the Gozerian.

Overall, Ghostbusters remains a classic film with one of the most likeable casts in cinema history, a unique story and amazing visuals.