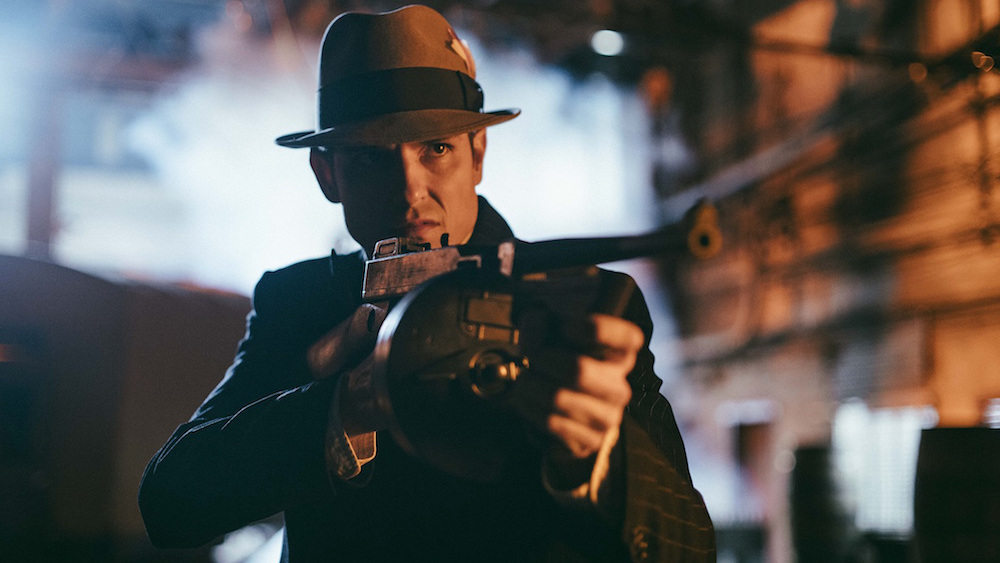 Gangster Land isn’t anything we haven’t seen before but it has a charismatic lead in Sean Faris and Jason Patric is always watchable.

Plot: The story of America’s most famous mobsters and their rise to power, GANGSTER LAND examines Al Capone’s ascension through the eyes of his second in command, “Machine Gun” Jack McGurn. Once an amateur boxer, McGurn is lured into the Italian mafia after the murder of his step-father. Upon joining, he rises swiftly through the ranks along with friend and eventual Boss, Capone. As the Italian mob becomes the most lucrative criminal organization in the country, tensions build with “Bugs” Moran and the Irish mob which ignites a brutal gang war culminating with the St. Valentine’s Day Massacre.

Review: I’ve always loved the gangster genre and there aren’t that many new ones out these days so I was delighted to hear about Gangster Land (formerly called In the Absence of Good Men) which tells the story of the rise of Al Capone and “Machine Gun” Jack McGurn.

It doesn’t really bring anything new to the table in terms of story but it’s engaging for its breezy runtime and I really liked Sean Faris as Jack McGurn; he looks a little like Tom Cruise (in his younger days) but with a more fierce countenance. His story is a tragic one but it was self-inflicted so it’s hard to sympathize with a guy who machine guns people for a living. He could have been a boxer but when his father is murdered he vows revenge and joins up with Al Capone thus making the choice to essentially doom himself.

I’ve always thought Jason Patric deserved a better career so it was great to see him have a meaty role in this as a cop who will do whatever it takes to make sure justice is served.

You kind of rooted for Milo Gibson’s Al Capone who wasn’t as menacing as say De Niro in The Untouchables but he has a few moments, like when he’s practising his golf swing on someone’s face. This is probably a little weird of me to say (and probably not surprising) but I think it could have been more violent; not just because I’m a sick bastard (I am) but also just to up the sense of threat. At no point does this movie make this life look glamorous but I would have liked a few more scenes of Al Capone beating the shit out of people (like De Niro in The Untouchables) or any of Scorsese’s gangster movies which literally make you flinch at the awful things these people do for a living.

If anything the movie could have also been longer so we had more time to really get to know the characters; it all moves a little too fast so we never get to truly care about the outcome. There also isn’t all that much in the way of action but I imagine it is mostly due to budgetary restraints. Despite all that, it doesn’t prevent it from being well paced and entertaining.

Overall, Gangster Land isn’t anything we haven’t seen before but it has a charismatic lead in Sean Faris and Jason Patric is always watchable.