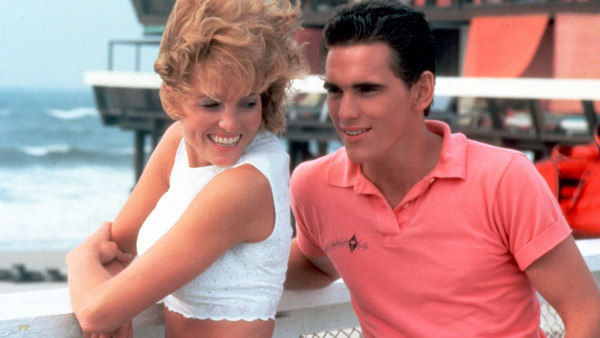 A sweet movie. Matt Dillon is good in it. It’s refreshing to see an ’80s teen film without the sex hijinks. The Blu-ray looks nice.

Plot: A recent high school graduate unsure of his future gets a summer job at the Flamingo beach club, and meets the charismatic Phil Brody.

Review: The summer of 1963 will be a memorable and valuable time for teenager Jeffrey (Matt Dillon), who comes from a humble home in Brooklyn. His hard working father (Hector Elizondo) is a plumber, but wants his son to have a good education and a good career. Instead of taking the summer job his father sets up for him at a law office, Jeffrey takes a job at a beach resort parking cars and making almost $50 a night in tips. It’s a hard thing for his dad to deal with, but he lets his son do his thing, and suddenly Jeffrey is making new friends in high places, like a slick car dealer and card shark named Brody (Richard Crenna), who helps him get a leg up at the resort with a job as a cabana boy. In the midst of the summer, Jeffrey also gets a hot girlfriend named Carla (Janet Jones), and as his confidence soars, he defies his father who is starting to realize he’s losing his son. As Jeffrey comes of age, he eventually comes to the place where he understands that his new friends aren’t as they seem, and that his father is a good man with his best intentions at heart.

A fun and breezy teenage comedy / drama set in the ’60s, but for no specific reason other than the nostalgia factor, The Flamingo Kid has a sweet center and not a mean bone in its body. It’s not the typical ’80s teen sex hijinks romp, which is nice, and co-writer and director Garry Marshall treats the material with a loving hand. Dillon is good in it, and his co-stars shine as well. The soundtrack is packed from start to finish with songs of the era, and a few contemporary songs as well (which is a little weird if you’re paying attention).

Kino Lorber’s new Blu-ray of The Flamingo Kid looks pretty crisp and filmic in high definition. Compared to the previous DVD release from MGM from over a decade ago, this is a recommended upgrade for fans of the movie. Special features include an audio commentary by filmmaker Pat Healy, and a trailer gallery.