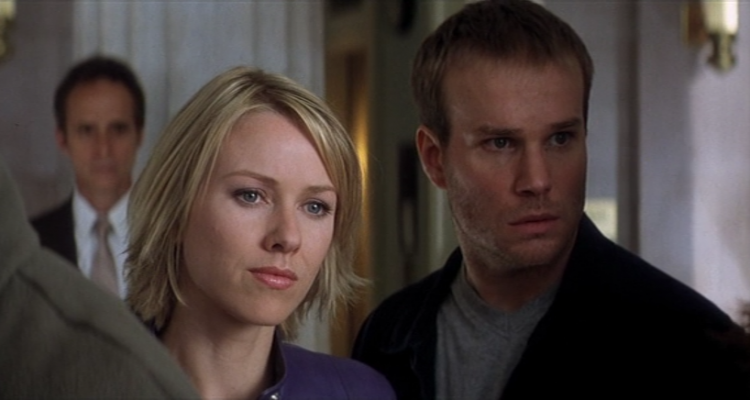 Down looks stylish and it has a good supporting cast. The Blu-ray looks and sounds better and contains more special features than the film deserves.

Plot: When the express elevators in New York City’s 102-story Millennium Building start to malfunction, elevator mechanics Mark (James Marshall of TWIN PEAKS) and Jeff (Eric Thal of THE PUPPET MASTERS) are sent to find the cause. After a series of gruesome and deadly “accidents” occur, Mark joins forces with spunky reporter Jennifer (Naomi Watts of THE RING), who’s on the hunt for a juicy story. As the death toll rises and the building is sealed off amid claims of terrorism, Mark and Jennifer attempt to unravel the horrifying secret behind the mysterious behavior of the bloodthirsty lift before it takes them – and the entire city – DOWN!

Review: An English-language remake of the Dutch horror thriller The Lift, Down tells the same story on a bigger scale, with more characters and with a wider scope. A high rise building in New York is host to a murderous elevator shaft, and as two elevator repairmen (played by James Marshall and Eric Thal) investigate the cause of a number of unexplainable deaths in the elevators, a scrappy reporter (Naomi Watts in an early role) stirs the pot with her investigative journalism. As it turns out, a scientist (dependable Michael Ironside) implemented an experimental computer chip in the elevator controls, and the darn thing became sentient and is now on an uncontrollable rampage!

Dutch filmmaker Dick Maas remade his original film here, and while I kind of enjoyed the wonky, weird qualities of The Lift, I found his English language translation of Down to be very poorly written and haphazardly directed. It’s also way too long for what amounts to a monster movie at 111 minutes, but its biggest offense is bad, clunky writing that has the central characters reciting amateurish, profane, and silly dialogue for almost two straight hours. The movie is pretty stylish, though, and Maas has a good eye with his camera. The movie’s best feature is its top notch supporting cast – Ron Perlman, Ironside, and Edward Hermann – who all elevate the poor material with their professional deliveries. You’d never guess that Naomi Watts would have gone on to become famous by her performance here.

Genre label Blue Underground took the time and effort to release a great looking Blu-ray / DVD combo set of Down. Never released in the widescreen format until now, the movie certainly looks sharp and attractive in this 2K transfer. Bonus features include an audio commentary by Maas and the stunt coordinator, as well as a making of feature, behind the scenes footage, trailers, and more. Frankly, this is more than Down deserves, but cult horror film completists should add it to their collection anyway.