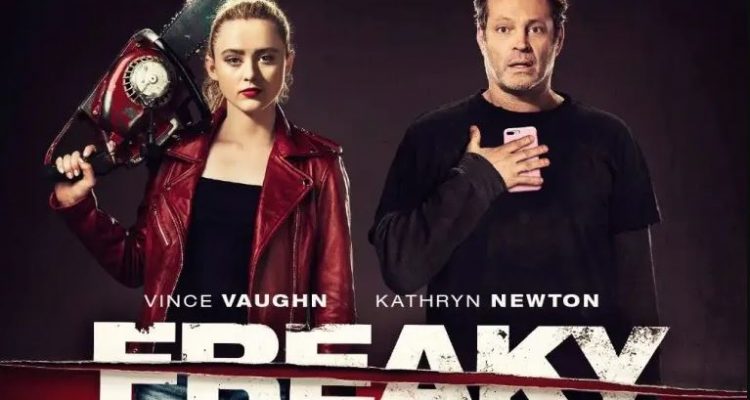 Grotesquely violent yet funny and sweet in equal measure, FREAKY will delight fans of horror comedies.

Plot: A serial killer and his teenage victim magically swap bodies. They have just one day to reverse the process but that is easier said than done.

Review: The “slasher” subgenre unfortunately has often lacked the subtle wit or social commentary that other types of horror films have lurking below their dark exterior; these aspects that lead to a deeper appreciation of a horror film when the giddiness of seeing outlandish murders created by top-notch effects artists begins to wear off. The slasher film is often unfairly treated with more shallow intent. They become just films about those “cool” kills and the mythical killers who cause them. Films in the slasher mold can be more than that. Writer/director Christopher Landon certainly seems to think so. His last two films, HAPPY DEATH DAY and its sequel HAPPY DEATH DAY 2U, took the slasher genre and mixed it with time loops, à la GROUNDHOG DAY, to create films in the horror genre that not only were fun, creative, and effective but that also spoke to ideas of victim empowerment and personal growth. Well thanks to their success, Landon is back at it again with his latest film, FREAKY.

FREAKY, co-written by Micheal Kennedy (FAMILY GUY), is another horror mashup but this time the slasher film is mixed with the “body swap” comedy, where two characters through mystical means accidentally switch bodies and have to scramble to somehow reverse the process. Here our two characters are the Micheal Myers-like “Blissfield Butcher” (Vince Vaughn, SWINGERS) and his latest victim, shy high schooler, Millie Kesseler (Kathryn Newton, POKÉMON: DETECTIVE PIKACHU). Right as the BUTCHER is about to end Millie’s life a mystical transformation happens where the two switch bodies. Now Millie is trapped in the hulking form of the infamous serial killer and the Butcher has her’s… and he is not going to give it back without a fight.

FREAKY is not as concerned with scaring the audience as it is taking them on a funhouse ride of moments meant to illicit tense jumps and shared cathartic laughter. Its main focus is on being entertaining, which it excels at. Its other goal is to examine the idea of self-empowerment. Millie is shy despite having many obvious good qualities. She is bullied by more popular kids and puts the needs of her family and others above her own at every turn. It isn’t until she inhabits the giant frame of Vince Vaughn’s Butcher that she can see the world without intimidation and fear and it’s liberating. Her initial worldview is also challenged when she sees how others react to the Butcher’s confidence when he is masquerading in her body. FREAKY’s main arc is of a young woman learning to assert herself once she can step back and see her own potential. It feels fitting for what is a twist on the concept of the slasher “final girl” survivor trope. Millie’s growing assertiveness takes one of the few consistent subtexts of the slasher subgenre and pushes it to the forefront to make a fun film that is also boldly feminist, without being preachy, and sure to be cherished by the youthful audience it is targeting.

As I stated before, messaging aside, FREAKY is immensely entertaining. A large part of that is due to the lead performances of Kathryn Newton and Vince Vaughn. Both of them nail the physicality of their original personas but the film truly becomes a delight when they switch roles. Vaughn’s brutish physicality and icy hungover glare make him an effective slasher archetype but he is a revelation as Millie. It doesn’t feel like an actor trying to act like they think a teenager would behave. He embodies the role and brings as much honesty and vulnerability to it as Newton does. It’s a fearless performance and taken in as a whole, I’m not sure any role in Vaughn’s career previously has more perfectly encapsulated what a talented performer he is than this one. He’s that good here.

Not to be outshined, Kathryn Newton absolutely owns the role of the Butcher. Her nebbish-ness as Millie melts away and it’s replaced with chilling confidence wrapped up in a stylish red leather jacket. If the world is fair, this will be star-making role for her. She feels instantly iconic (I can see her look being a very popular costume come next Halloween) and Newton relishes every moment she gets to be menacing and wreak mayhem on screen.

Speaking of mayhem, the violence and gore present in FREAKY is much higher than in Christopher Landon’s previous films. The “R” rating really lets the special effects team cut loose here. Bodies are ripped apart, mangled, and just generally destroyed with a kind of gleeful inventiveness that could have only come from life-long fans of the genre. There are numerous inventive kills and some that are clearly loving gore-soaked homages to other classic slasher films that will win over even the most skeptical horror fan.

The wonderful lead performances and stellar effects work is coupled with a snappy script that barrels ahead at a rapid pace and a wonderful supporting cast that is full of fun (there’s that word again) characters you’ll actually enjoy spending time with. In fact, my biggest complaint with the film is that I wanted more time in its world with these characters. It’s a film that leaves you wanting more. As far as flaws go, that is a great one to have.

FREAKY is a film just waiting for horror fans to discover and eventually revere it. There is so much here that will please both fans of horror and comedy alike. If you don’t mind a little (okay… A LOT) of blood with your laughs, then this is one not to be missed.