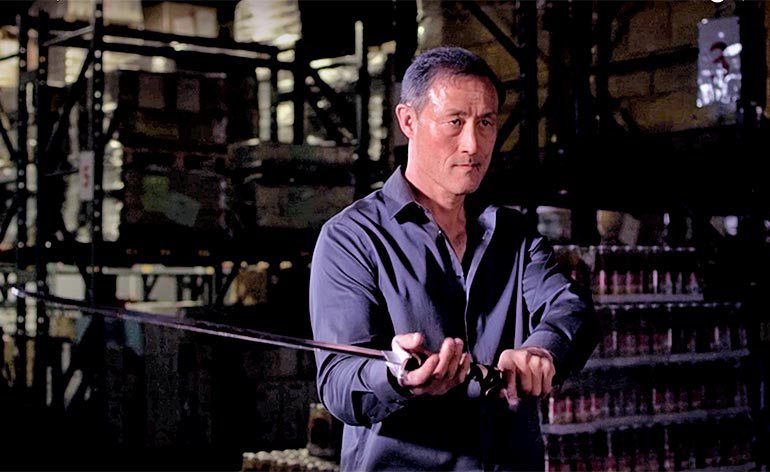 Review: “In this line, whether you live or die depends on your weapon of choice.”
Masters Hall of Fame martial artist Jino Kang (Blade Warrior) writes, directs and stars in Fist 2 Fist 2: Weapon of Choice. Despite the title, this movie is not a sequel, but a standalone film. Part noir, part martial arts, this film is all action throughout. Kang stars as Jack Lee, a former assassin who has more recently been spending his time in San Francisco raising his niece Jaime, played by Kelly Lou Dennis (Vampariah) as if she were his daughter. Upon Jaime being kidnapped with the intent of being sold to traffickers by mob boss Michael Banducci, played by Douglas Olsson (NCIS, Criminal Minds), Jack goes on the hunt for revenge and rescue at once. Assisting Jack in the effort is Katherine Celio (Around the Bay) as the determined SFPD detective Ash Jordan, who immediately displays her career frustration with the Feds and the system and thus the perfect candidate to assist the more morally ambiguous Lee. The result? Action. Lots and lots of action.
Weapon of Choice starts up with a frenetic pace and lets up off the gas pedal just enough to get the gist of the story. Every cliche in the book gets thrown into this movie, from the stoic anti-hero to the villainous mob boss, even some witty one-liners (“May I have this dance?“) and every one to great effect. The San Francisco setting is established from the very beginning with a shot of the Golden Gate Bridge, and we also get some aerial footage and some Chinatown locations, even a quick glance at a massage parlor sharing a name with a classic video game, Double Dragon.
While some of the early dialogue is a little forced and sometimes even unintelligible, this movie is loaded with lots of well-written dialogue, with some clever humor and sleazy innuendo delivered by Olsson, which solidifies his heel character. Celio gets in enough time to come across as a legitimately frustrated and emotional figure, and while some of the peripheral characters feel downright unnecessary, they also happen to serve as fodder for Lee’s onslaught, and the action is really what keeps this movie going.
Jino Kang’s brilliant fight choreography pushes the envelope with its diversity among use of guns, swords, hands, feet, small joint locks and plenty of ground fighting. The final 15 minutes of the film consist of one long gauntlet of battles with henchmen in a warehouse, with ample gore supplied via mostly practical effects.
For a budget clearly meant for video, this movie plays and feels like a theatrical release from the ’80s or ’90s, and I would have gladly seen it in a first run theater over the higher budget releases of today. There is absolutely no way an action movie connoisseur won’t enjoy this film. This is the most fun I’ve had watching a movie in a long time.
Filmed in San Francisco, California. Jino Kang writes, directs, stars and choreographs the fight scenes.