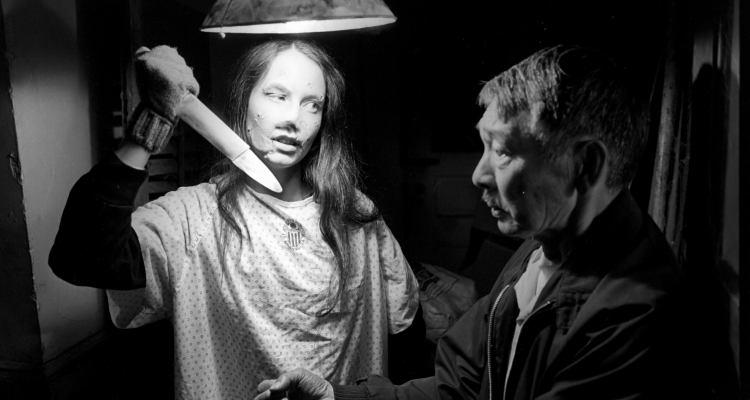 Plot: Julia, a teacher in a school for the deaf, has a hideously deformed and deranged twin sister that resides in the local looney bin. She escapes to gate-crash a surprise birthday party for Julia.

Review: Special needs teacher Julia (Trish Everly) is living the idyllic life: She’s beautiful, has a great career, is in a good relationship with her boyfriend, a psychiatrist, and everything seems okay … until the day she gets a call that her twin sister – a psychotic – has broken out of a lunatic asylum and is coming after her. Her twin sister, we learn, was twisted since birth: Her favorite pastime as a child was torturing Julia, and now that she’s an adult we find out that she’s horribly disfigured and blames Julia for her ailment. As Julia awaits with dread the return of her sister, the body count piles up around her, as her twin and a vicious Rottweiler dog lurk in the shadows, murdering Julia’s friends and neighbors. With her and her twin’s birthday just days away, it seems that her surprise birthday party is going to be packed with dead bodies rather than the usual happy partygoers.

A surprisingly solid Italian slasher film (shot in Georgia) from director Ovidio Assonitis, Madhouse has some strong elements including a nice atmosphere, good performances, shocking scenes of violence and gore, and a palpable sense of dread and melancholy that permeates through the whole movie.

The previous DVD release from Dark Sky pales in comparison to this stellar release from Arrow Video, which contains a brand new 2K restoration and a handful of choice special features including new on-camera interviews with Assonitis and a cast member, as well as a running audio commentary by slasher specialists The Hysteria Continues. It also has a reversible slipcover with newly commissioned artwork and original artwork. A solid release from Arrow.