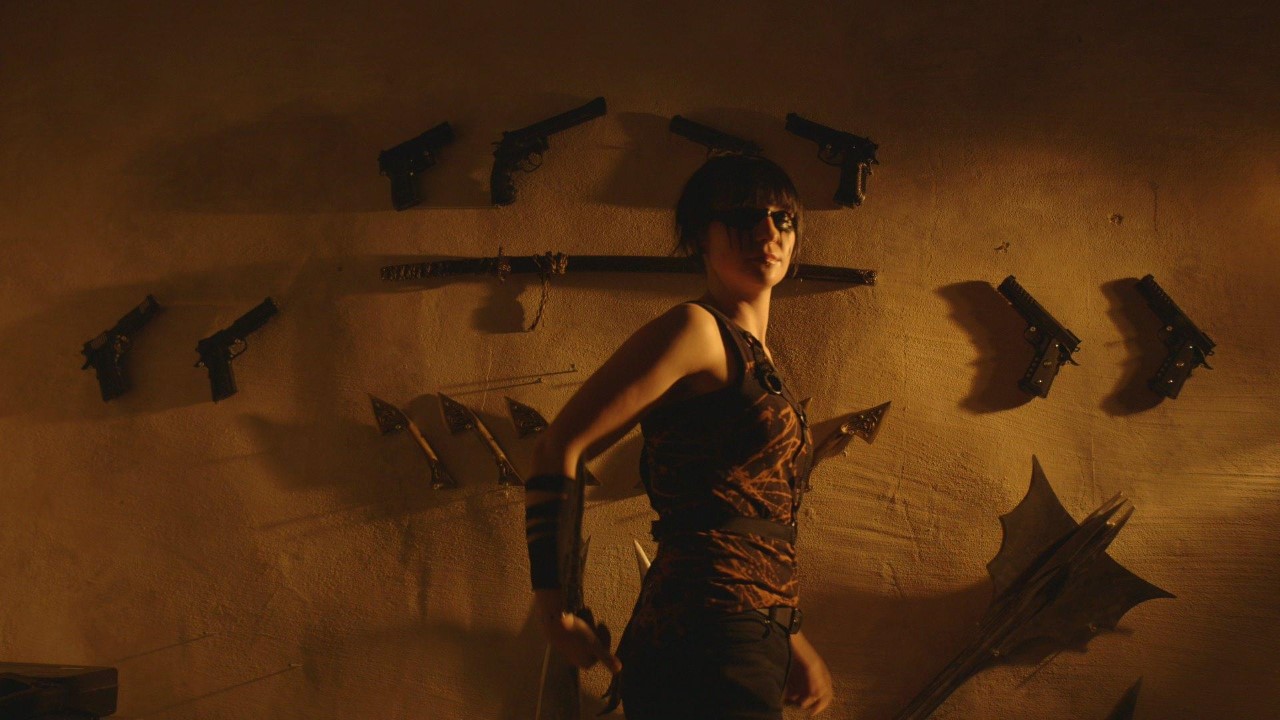 Zoe Kavanagh, writer/director of the new independent horror-actioner Demon Hunter, tells us how a Bruce Campbell classic inspired both her love of film and filmmaking.

Where does your love of film come from?

I grew up with film. I began watching horror at a very early age and I was always fascinated by imaginative and fantastical genre films. Escapism more than drama. I remember when I was very young I would rewatch Evil Dead 2 over and over again and wear out VHS tape. I don’t rewatch as bad as that now.

When did you enter the filmmaking game?

In 2006 the first thing I ever made was a music video for My Dying Bride called ‘Thy Raven Wings’. I had started my first year in college and wanted to do something in between the course so I made use of the college gear, location and shot a short film about a suicidal guy in purgatory. I cut it to My Dying Brides song and in 2017 the video has over 400,000 views. I’ve done so many music videos since then and my filmmaking skills have evolved considerably.

How long have you been trying to get this movie made? Been a long journey?

In 2011 I had it being developed as a web series. The first half of the film was initially five episodes of a season. After a slow development process I realised it maybe a better idea to make it a feature so in 2012 I shot twelve pages of the script to showcase my style on low budget and try to interest investors to finance the film. That didn’t work so I saved up money and tried to shoot half the film in 2013. Things didnt fully go to plan though and so I saved up money and had planned to shoot the other half in September 2014. So in June me and Lilla (production designer) set up the art department crew and began working on creatures, costumes, props and weapons.
Two weeks before filming our lead actress pulled out and that put me in a dilemma. I couldnt pull the plug I need to rally through even if I spent silly money thus far and had taken out a loan for this shoot. We put out a casting call and all of a sudden a hundred or more people emailed their Cvs and wanted to audition for the role. It was down to two and Niamh Hogan got the role. We filmed a week later and then did pickups in 2015, post production was a year. Film festival in 2016 and now in 2017 its finally released!

And the result? Happy?

Yeah absolutely! I think the film is fun and different. For the limitations we had and the lack of budget we really tried our all and succeeded. The character of Taryn is perfectly portrayed by Niamh Hogan and the style of the world is intact. I wish we had a bigger budget but we did our best and gave it our all.

Any comments about the film surprise you though?

What surprised me was how many people liked the soundtrack. That was something that was very particular and I felt it may alienate some but it is a part of the Demon Hunter world so it needs to have that vibe of synth and metal.

Another thing that surprised me was that at every screening I was in the audiences laugbed at all the right jokes. There’s not many but they’re there. I feel if they laughed at certain jokes wellthen they’re invested and I got them!

Have you discovered that a segment or demographic that you weren’t counting on is enjoying the movie?

When seeing it in the cinema and at a few screenings I noticed older adults enjoyed it just as much as the younger audience in fact. People of all ages would bring up the soundtrack as one of its strongest points. You make a film and you kind of know who the target audience is, with this its teenagers but it surprises you when adults and older types dig it just as much.

Clearly, you’re a fan of old-school samurai and horror flicks. Which films directly influenced your film?

Rocky IV was a huge influence in the montage and strong musical moments and also Highlander. A Nightmare on Elm Street 4: The Dream Master’s final act where Alice tools up and fights Freddy!  The Crow in tone and also for its use of music through storytelling whilst being a melancholic revenge film. Azumi is a great strong female samurai movie by Ryuhei Kiamura where she takes on warlords in feudal Japan. The Terminator and Big Trouble in Little China also. All empowering stuff.

Do you remember the first time you saw a horror movie in a theater?

I think the first horror film I saw in cinemas was The Ring remake in 2002. I was 15 at the time and I remember when I hit that age I felt here’s my opportunity to see as many horrors as possible on the big screen. I did enjoy the remake and I loved the score but I thank the film to opening my eyes to J-horror at the time.

How different a movie would this be if it were made by a big studio, with a name actor, you think?

It would probably be fully realised and deliver in all aspects to the audiences fulfillment. I wish I made it that way!

Yeah I think the film would be in the mid budget range of 20-40 million. Star a rising female lead and they would aim to release it in January or September to cash in on the knowledge that comparative titles have performed well in those blocks.

Demon Hunter is now on VOD