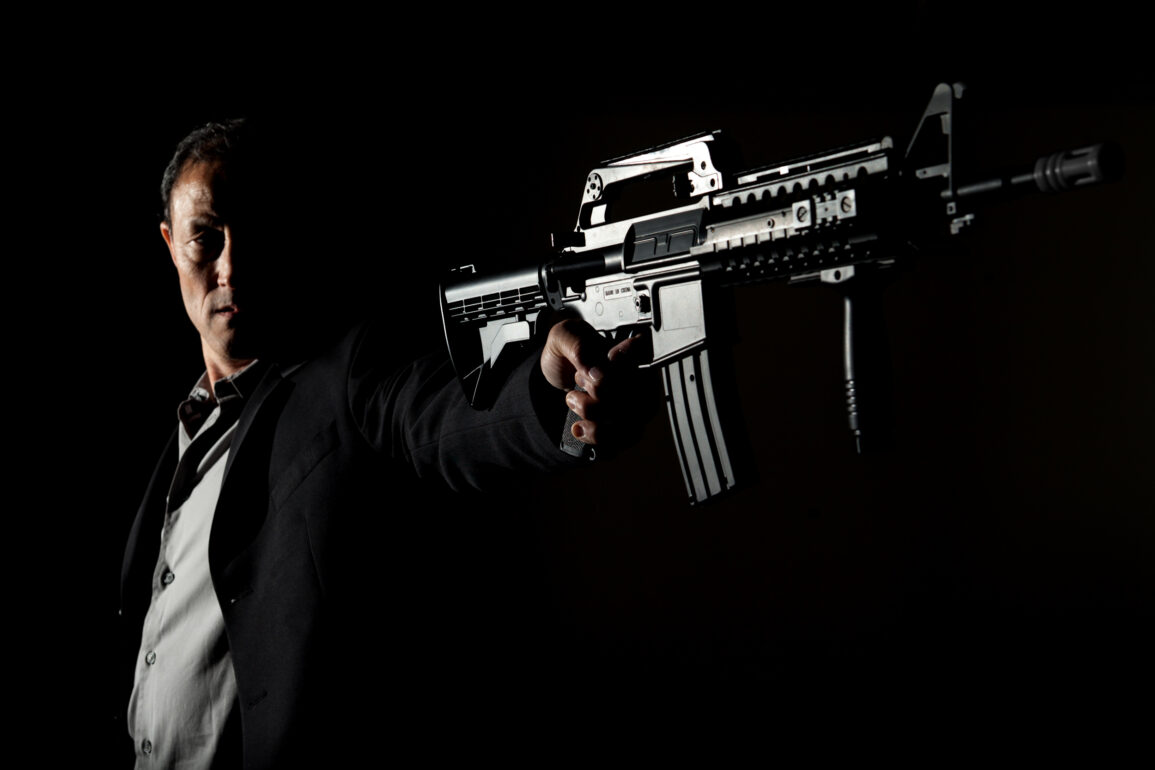 Thank you for providing your time in this interview.  As a lifelong fan of action movies and martial arts, it is an honor to be in the presence of someone like you.
The honor is mine and thank you for the opportunity.  Glad to know that you are a fan of action and martial arts as so am I.
When did you first start up the martial arts, and more importantly, when did you decide you enjoyed them, and that this was something you wanted to pursue as a career path?  Is there a particular discipline that you hold closest to your heart to this day?
I started when I was a toddler, taught by my late father Myung S. Kang and my uncle Don Hak Choi in S. Korea.   I didn’t really know if Hapkido worked or not, but one day my friends and I were playing in the pool and I was about 15.  Out of nowhere this big bully came up to me for no apparent reason, decided to mess with me and grabbed my wrist and wouldn’t let go.  We were standing about waist height in the water.  My instinct kicked in and wrist locked him and all that training was activated.  He screamed and his body buckled and submerged his head into the water.  I let him up without letting go of the wrist lock, and at that moment, I had an epiphany; This Hapkido really works!  Just to be sure, I submerged him again.  I was thinking to myself this is incredible.  Here I was a scrawny kid (I haven’t started lifting weights yet) taking down a big bully at will.  That’s when I really fell in love with Hapkido.  I was able to, most of the time, handle numerous violent situations peacefully with Hapkido joint lock techniques since then.
You have written, directed and been featured in 3 of your own movies now.  How enjoyable and rewarding has this experience been for someone who has had his hands on the entire process, front to back?
I have to say I enjoyed the entire process.  In the beginning, I enjoy the creativity that comes along
with the writing the script.  However, getting the money and investors together is not easy to finance the picture.  Next is assembling the cast and crew and securing locations (this was tough too).  Shooting the film is most fun yet challenging aspect, because not everything gets done the way you envisioned.  However, when you have it all in the “can”, you’re very satisfied.  The editing, sound and music is very grueling because it’s so time consuming.  You can shoot the film in thirty days but editing can take six months to a year.  All in all, when you have a finished product, it solidifies your vision and commitment to the project.

Can you describe the process of making your very first movie to aspiring filmmakers out there?
Please read above and If you still want to be a filmmaker, I recommend that you polish your script within your budget that you can secure financing.  Then align yourself with trusted people that can share the same goals.  The journey of thousand miles begin with the first step – so get out there and take that step.  You’re going to run into problems, trust me you will, but don’t let that stop you and think of it as an opportunity to make things better.  Remember, finish it.
I noticed you use several clever one-liners in Weapon of Choice.  This almost seems to be a lost art at this point in mainstream cinema.  Was this something you focused on during the writing process?  If so, was there any movie or personality who influenced your wit in doing so?
Ha, ha, thank you for that.  Yes, it comes down to writing the script.  We as an indy filmmakers, we certainly don’t have the Hollywood budget, probably not even the 1/10th of it.  However, we do have a brain and certainly try to maximize your film with smart writing.  I notice a lot of low budget action films neglect that aspect and just fill it with mindless action scenes, they’re cool but not compelling enough for me to keep interest in the films.  I’m also a wise guy and trickster, so I ‘ve been told and I tend to use that trait in the dialogues or scenes.  I, or we sometimes we, collaborate and paying attention to lines is critical in delivering engaging dialogues, thereby providing entertainment in all areas of the film.
I understand you have a black belt in Gracie Jiu-Jitsu.  Under whom did you train, and how much has Jiu-Jitsu influenced your philosophy on martial arts since then?
When I was researching for Fist 2 Fist, I walked into Charles Gracie school and he was very accommodating.  He had an open attitude towards other martial artists as well, which was cool.  Even after filming was done, I remained a student and 14 years later, I am a black belt professor of Gracie Jiu-Jitsu.  We even have Charles Gracie school in our lower level.  I have to tell you as a master in Hapkido getting tapped by blue belts was no fun and humbling experience.  But I kept at it, left my ego at the door and put on a white belt and never looked back.
I believe you have learn how to defend yourself from the ground.  All fights usually start stand-up but they end up on the ground.  Hapkido has Judo and Aikido throws but not much ground game and I believe Brazilian Jiu-Jitsu fills in that gap.
Who or what were your greatest influences in the decision to make your own movies?
The legends living or dead, like Bruce Lee, Jackie Chan, Takeshi Kitano, Toshiro Mifune, Sergio Leone, Clint Eastwood, Luc Besson, Akiro Kurosawa and Michael Mann.  I take off my hat for these legends for their work, creativity and discourse.
Was there one defining moment for you where you knew making movies was something you wanted to do?  If so, what was it?
There was a few, first was Yojimbo, that my father took me too, second was Bruce Lee’s Chinese Connection (Originally titled Fists of Fury) and finally when I witnessed and participated in Leo Fong and Ron Marchini’s film, Weapon of Choice.  Which sadly never got released, so I heard.  I enrolled in College of Marin’s film program and fell in love with the process.
What is your opinion of the current MMA landscape?  Who are your favorite fighters, and do you follow any of the international leagues other than the UFC?
My opinion is that I wished the champs like McGregor who is idolized by many young impressionable young fans, be humble and respectful of others.  He could carry the right message to these young people if he wanted to, instead of trash talking and strutting his feathers like a peacock.  I haven’t followed so much in recent years but I liked and respect the older legends like Couture, Liddell, Sakuraba, Penn, Hughes and Silva.

There were several nods to the San Francisco setting for Weapon of Choice, including noticeable locations such as Chinatown.  Was this something you chose to do out of acknowledgment of the setting as a director, or were you intent on presenting San Francisco itself as an area of meaning to you personally?
Yes, San Francisco and Chinatown is such a fascinating backdrops for me personally and as a film maker.  When we immigrated from Korea, San Francisco is where we landed and held our roots for long time and I still have my Hapkido/Jiu-Jitsu School in San Francisco.  I love this city, people and culture.  What I don’t’ like is the crime but that is associated with any big cities.  The Chinatown is so rich in history and I love the fact that it’s mini China.  People here are so nice, when we approached the shops and the owners were so gracious and accommodating for letting us film in their shops.  I am grateful for sharing their beloved town.  The beautiful architecture and landscape continues to draw me in to film here.
The final scene in Weapon of Choice consists of a gauntlet of sorts, where your character goes up against several opponents for the better part of 15 minutes.  As a choreographer, this had to have taken its toll on you, even with editing.  Were you prepared for the process of filming, performing and editing, or did this prove to be more of a challenge than you had anticipated?  Regardless, the end result is astounding as a fan of action films, especially for the budget.
Thank you very much.  Yes, the last 15 minutes took 8 days to shoot and we had to work around the availability of the locations.  Choreography is usually planned out in advanced and most guys were stunts/martial artists so rehearsal for each fight scene took only 1 or 2 days each.  If I had several million dollars, I would have tripled the time in rehearsal and planned the shoots.  Oh, well, it is what it is.  Every time I shoot, I say to myself that this is the last time I’ll be in front of the camera, but when I get the editing done and see the finished product, I forget all about the painstaking process and eager do it all over again.  I’m guessing that’s how Jackie Chan feels because he’s getting up there.  I’ll keep going as long as I can.

Thank you for your time, and I look forward to catching more of your work in the future!
Thanks for having me and it was my pleasure.  By the way, keep an eye out for my new short film “Kid Fury” which will be available soon on the internet.  Cheers!