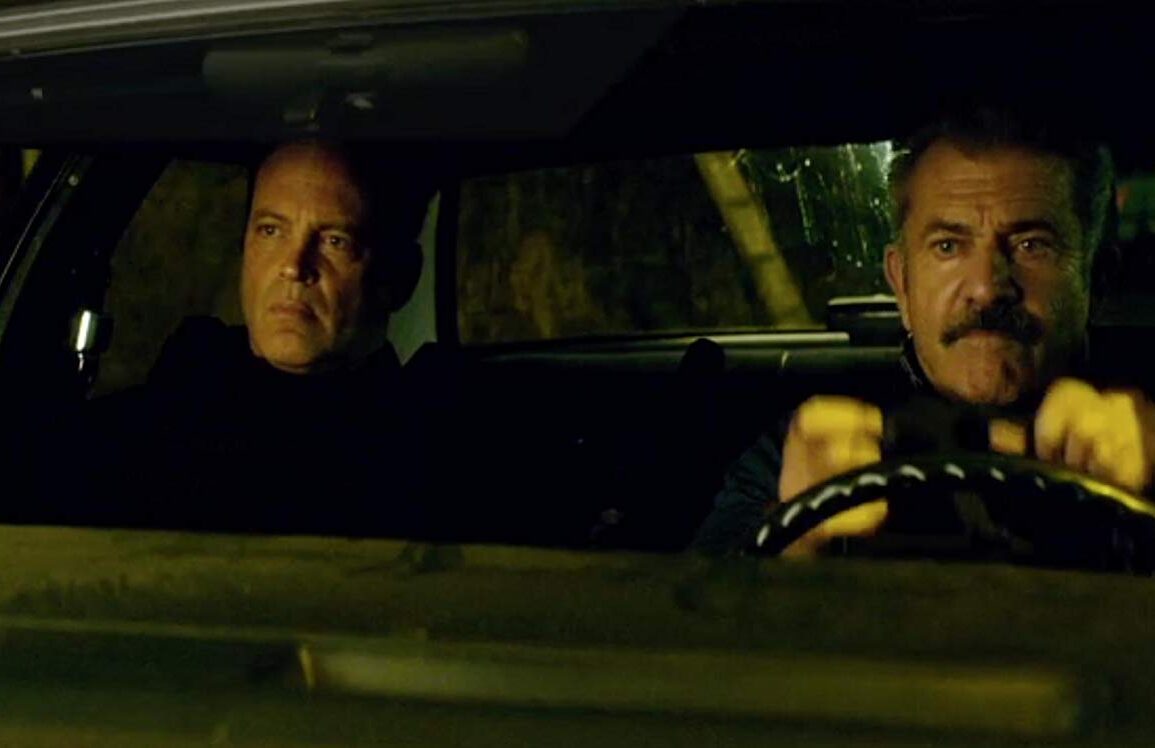 Bleak, brutal, and mean-spirited, S. Craig Zahler’s follow-up to last year’s BRAWL IN CELLBLOCK 99, the ‘cops and robbers’ drama DRAGGED ACROSS CONCRETE is one for diehard fans only.

Plot: Two embittered police detectives descend into the criminal underworld and find more than they wanted waiting in the shadows.

Review: S. Craig Zahler has quickly become a unique voice in genre cinema. A novelist turned screenwriter who graduated to directing his own projects with 2015’s acclaimed horror western hybrid BONE TOMAHAWK, followed up by the prison exploitation film homage, BRAWL IN CELL BLOCK 99 – Zahler has shown a fascination with morally questionable characters and brutal, unflinching violence. He wraps these two fetishes around quiet, static moments of banter that lull the audience before swiftly grabbing them by the throat and confronting them with his nihilistic worldview.

Knowing Zahler’s style, it is clear that his latest directorial effort, DRAGGED ACROSS CONCRETE, is him operating at his most unfiltered. The story concerns two disgraced police officers, played by Mel Gibson (BRAVEHEART) and Vince Vaughn (SWINGERS), a recently released ex-con and his best friend, played by Tory Kittles (SONS OF ANARCHY) and Michael Jai White (BLACK DYNAMITE), and three mysterious masked criminals who are all on a collision course of violence over ill-gotten goods. To say more of the plot, which admittedly is bare bones, would be doing the film a disservice. What makes DRAGGED ACROSS CONCRETE compelling is not the plot progression but in the unusual flourishes that Zahler and his cast bring to the story.

A lot of the film’s lengthy runtime, it clocks in at a hefty two hours and thirty-eight minutes, is spent with the characters having conversations. This feels like the influence of Zahler’s novelist background. The film is prone to tangents, whether it’s Gibson and Vaughn talking while staking out suspects, or Kibbles’ ex-con playing video games with his disabled younger brother, or returning Zahler players Jennifer Carpenter and Fred Melamad exchanging flowery pleasantries before being dragged into the violent conflict at the heart of the film – there is a lot of shading to characters, even the ones that are ultimately superfluous to the overall plot.

The extended character moments can seem aimless but, as I stated above it all leads to moments of truly horrible violence that hit like a slap to face. The action and gore effects are presented in a realistic “matter of fact” way that is truly sobering. There is no glamorizing of the violence on display in

DRAGGED ACROSS CONCRETE. This film will be a real test for some viewers as it honestly feels like Zahler is trying to see how much bleak brutality his audience is willing to endure.

The brutality is not the only thing Zahler is asking his audience to endure here. He takes his penchant for questionable characters to extremes in the film as well. Many of the characters in the film are overtly racist. This is not just limited to the antagonists in the film either, even characters we are expected to sympathize with skirt the line of acceptable social behavior. While the film never glorifies their beliefs, it makes an already dark and difficult film that much harder to watch.

The film is expertly crafted though. Zahler has grown into a much-improved visual director. DRAGGED ACROSS CONCRETE has almost none of the bland staging and “flat” look of his previous two films. The acting is across the board excellent and the original music (created by Zahler and various collaborators, including the famed R&B group the O’Jays) is wonderful.

Are those positives enough though to recommend a film as unapologetically mean-spirited as this one is though? I think so but DRAGGED ACROSS CONCRETE won’t win S. Craig Zahler or his actors any new fans. This one is for the diehards only and even they may find themselves wondering, as I did while watching it, if this time he’s pushed the limit a little too far.