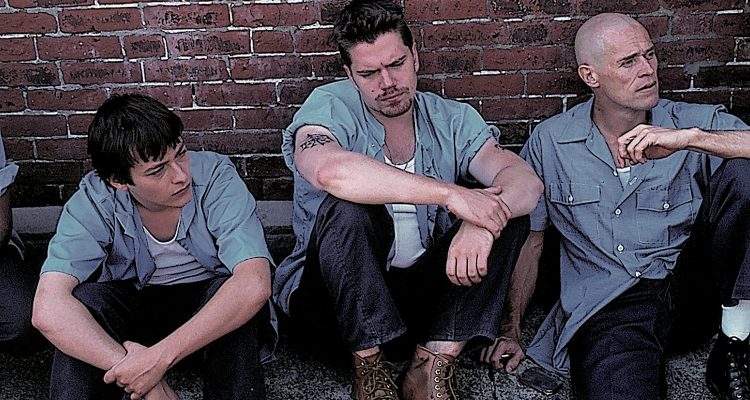 For a prison movie, this one is less sensational than most. It’s a simple movie but it has good performances and a decent story.

Plot: A young man goes to prison and a tough, older convict takes him under his wing as a mentor.

Review: Busted for pot possession, young Ron Decker (Edward Furlong) is made an example of by the court and is sent to San Quentin State Penitentiary for ten years. As the new fish on the cellblock, he’s easy pickings for the scum all around him, so he find a clique that can protect him. He’s sheltered by Earl (Willem Dafoe), who’s been king of the block for nearly 20 years, and most of the inmates know not to mess with Earl or his posse. As the months pass, Ron finds a relatively easy groove in his routine, and though he’s still targeted by rapists and truly evil guys, he finds that Earl has his best interests at heart. After he kills an attacker, Ron is sentenced to five more years, and so the only option at that point is for him and Earl to plan an escape.

Very down to earth and matter of fact, Animal Factory is a fine showcase for Dafoe and director Steve Buscemi (who also has a supporting role). Based on a semi-autobiographical novel by Edward Bunker (who also has a role in the movie), this is a well-handled and developed drama with no frills. Danny Trejo and Mickey Rourke have memorable supporting roles.

Improperly released theatrically in 2000, Animal Factory was basically relegated to a cable debut, and then a spotty home video release. A shame, really, because the film deserves to be seen, and with so many good performances and a solid little story, it has wide appeal. Arrow Video has just released a definitive Blu-ray edition of Animal Factory, and with its high definition transfer the film has never looked or sounded better. Eddie Bunker and Danny Trejo provide a congenial audio commentary, and new artwork was created for the cover (which is reversible). There’s also a thick insert booklet with notes about the making of the film.