Jess Franco was never considered a very good filmmaker, and his work here is middling at best, but if naked girls in skimpy loincloths and sex in the jungle floats your boat, then you’ve just struck pay dirt.

Treasure hunters and mercenaries go to the jungles of Africa to see if they can find diamonds … and a feral white girl, who was lost in a plane crash years ago!

Lost in the bush of Kilimandjaro in a plane crash, a little girl and her Scottish uncle emerge from the fronds and are worshipped as gods by the native peoples. Years later, the old Scottish guy is lording over a village with his rifle and his studies of the diamond mines nearby. His niece Diana (Katja Bienert) runs around topless, wielding a machete, and the tribe regards her as their leader. When a treasure hunter is intercepted by the tribe, they nearly behead him, but Diana intervenes and allows him to go … without the diamonds. When he returns to civilization, he tells the tale of the white goddess living amongst the natives, and he’s taken to Diana’s last living relative, a sick and dying old woman who has never lost hope of finding her precious Diana. The old woman hires a batch of mercenaries to go back to the jungle to retrieve Diana, and when they follow the treasure hunter’s coordinates, they do indeed find her, but she has no interest in going back with them because this isn’t such a bad life: Running free, in charge, and without any kind of civilized bias. But there is one thing she is curious about: Sex. She engages one of the mercenaries in an experiment to experience sex and intimacy (apparently the natives she lords over don’t interest her), but she encounters jealousy and rage from her second-in-command, a native queen who is only too eager to behead white interlopers. Will Diana get what she wants, or will the diamonds of Kilimandjaro be discovered by the white hunters and her way of life be permanently disrupted?

From exploitation guru Jess Franco, Diamonds of Kilimandjaro is pure hokum from start to finish; it resembles those trashy pulp comics sold in the Mexican and European markets at magazine stands for decades, featuring nubile, naked damsels, lusty explorers, and cannibals! Filled with casual full-frontal nudity, sex, and machete chopping natives, the movie does have some appeal (star Bienert was a minor when she made this), but it’s also incredibly junky and is full of clunky continuity errors and warbling inconsistent sound and dubbing. Franco was never considered a very good filmmaker, and his work here is middling at best, but if naked girls in skimpy loincloths and sex in the jungle floats your boat, then you’ve just struck pay dirt.

MVD Classics released a Blu-ray edition of Diamonds of Kilandjaro, and the picture quality is pretty good, but some of the sound (especially in the beginning) is, at times, terrible. No special features are included. 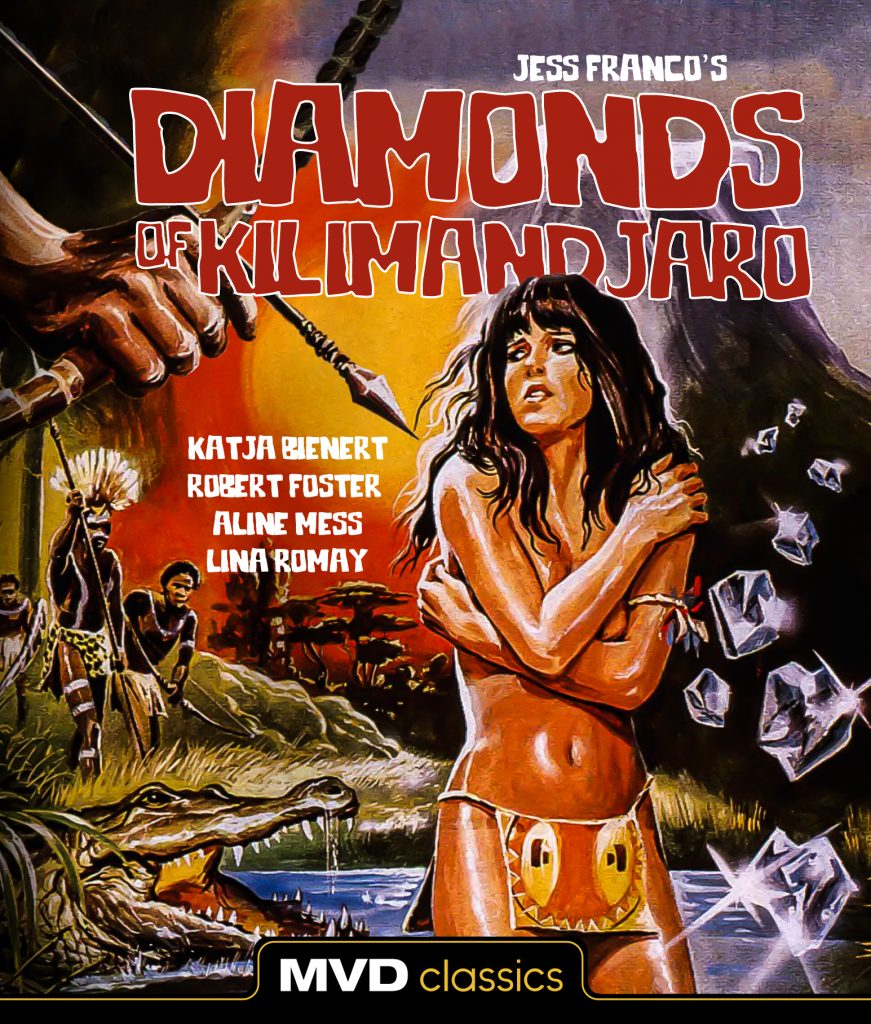