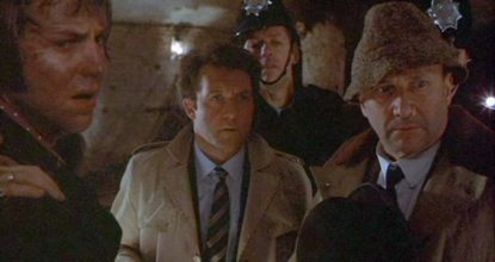 Plot: There’s something pretty grisly going on under London in the Tube tunnels between Holborn and Russell Square. When a top civil servant becomes the latest to disappear down there Scotland Yard start to take the matter seriously. Helping them are a young couple who get nearer to the horrors underground than they would wish.

Review: A respectable politico in London is last seen in a dingy subway station, and it raises alarm with Scotland Yard. The young couple that saw him last assumed he was passed out drunk or dead on a stairwell, and when the commissioner (played by Donald Pleasence) interrogates them over it, it appears they’re telling the truth. Over the next few days, a trio of travellers are brutally murdered in the same place the politician was last seen, but this time there’s a clue: some traces of plague-ridden blood samples are left behind. We already know that there’s a horrifying truth about the station: Living deep in the tunnels beyond is a boogeyman that has lived for generations after a cave in trapped some workers in the tunnels. The boogeyman has lived off the corpses he drags into his lair, and his mate has just died, so he’s on the prowl for a new woman to breed with. When he snatches the young woman whose boyfriend was questioned by the police for what he witnessed with the politician, a reckoning will be dished out by the young man, who will stop at nothing to get his girl back.

A very strong slasher / horror film from director Gary Sherman, Death Line really delivers on the icky factor, with a stellar villain and gross-out gags. There are some truly shocking moments in the film, and it’s all handled very sensitively considering it’s basically a monster movie. The sets, mood, and characters are all nicely captured, and while this film has been copied and emulated in other films like C.H.U.D. and Creep, it sets the template and raises the bar as high as it can go.

Blu Underground’s standout Blu-ray/DVD combo set presents the film in a fully restored 2K transfer, and it’s the best the movie has ever looked on home video. The previous MGM DVD (under the title Raw Meat) has just been surpassed in every way.