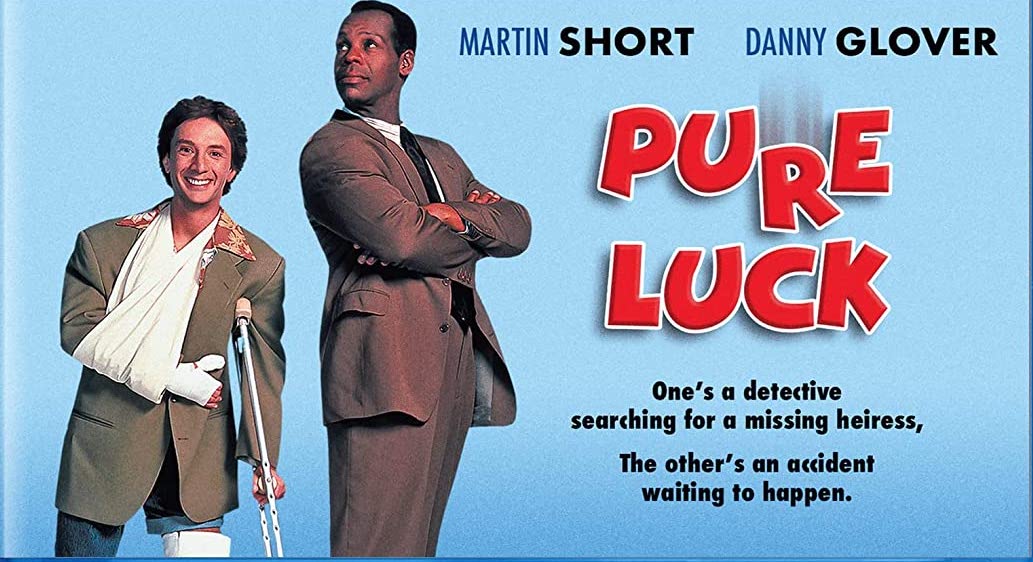 The best reason to get this is to have Pure Luck on Blu-ray. The film holds up well and is very much underrated.

Two attractive yuppies go on their third date, and they are both overthinking the entire endeavor. David (Martin Short) was supposed to get a promotion that day at work, but instead he got fired. To impress his date Kathy (Annette O’Toole) he borrows his best friend’s car and uses his friend’s swanky bachelor pad as a crash landing site if the date goes well. His friend (played by Paul Reiser in three walk-on scenes) knows how important this date is to David, and he senses that Kathy might end up being “the one” for his friend, but nobody knows how terrible the date will end up becoming. Kathy is hiding a few things too: She’s a mom of a seven-year old daughter and hasn’t yet disclosed this to David, but you can best be certain that the fact will come out before the night is over. David’s borrowed car gets stolen while he and Kathy are eating dinner, and his attempts to lie to her about his job, the car situation, and the apartment are all masked by his cute come-ons for sex, and when Kathy eventually does give in to him it greatly complicated their relationship, particularly when both of their lies come to the forefront of their conversations post-coitus. This leads to plummeting despair and dashed hopes from Kathy, who realizes that he’s been lying to her – and she to him – and what follows next is some redemption for them both, but not in the way anyone light expect.

Essentially a two-person play in several locations, Cross My Heart is very much an ’80s yuppie sex comedy that tries to “be real” in ways that another ’80s sex comedy called Casual Sex? tried to be. Both treat the subject of sex in the ’80s as a very serious topic with some comedic timing, but both managed to be uncomfortably manufactured and feel “written” by young writers. Cross My Heart has some knowing and honest conversations, and thanks to two earnest performances by both Short and O’Toole, the film at least manages to evoke a sense of naked honesty through selfishness and lusty ambitions. It works nominally well, but in today’s ultra accelerated social media-obsessed times the movie might feel like a relic of a bygone era where dating and sex with virtual strangers seemed quaint rather than risky. From producer Lawrence Kasdan and director Armyan Bernstein.

A very unlucky (or lucky, depending on perspective) young woman gets amnesia and becomes lost in South America, and her father sends an equally unlucky dweeb and a private detective to look for her.

Valerie (Sheila Kelly) is likely one of the luckiest or unluckiest people on earth, depending on one’s perspective, and when she lands in Mexico for a vacation, she promptly gets herself into all kinds of outlandish trouble. She’s robbed and knocks her head, rendering her an amnesiac. She’s kidnapped by a con man (played by Scott Wilson) and disappears off the face of the planet. Her wealthy father hires a private detective named Raymond (Danny Glover in a lark of a role) to find her, but after failing to come up with any real clues, he returns in defeat after more than a month. A crazy plan is hatched: A man of equal measure of bad (or good) luck is found in the person of Eugene Proctor (Martin Short). Eugene is a walking disaster, but he has no idea of any of that. He just walks down the street and bad things happen, but it’s just the way it is with him. Raymond takes Eugene to Mexico to see if lightning will strike for Eugene (he’s already been struck twice by lightning, once while in a movie theater!); and lo and behold it does – Eugene somehow manages to conjure some clues that Raymond overlooked and luck – either the worst or the best kind – starts working for them and leading them closer to where Valerie might be. But getting to the end of the journey will involve plane crashes, multiple near-death experiences including getting shot at, getting snake bit, getting stung by bees, and all manner of impossible coincidences like somehow managing to find the only quicksand in the desert and sinking in it!

A hilarious buddy/ buddy comedy adventure, Pure Luck works on me every time I see it. I remember when this came out theatrically and the comedy in it never gets old. Glover manages to work well against the slapstick that Martin Short offers, and there are moments in the film where I laugh uncontrollably. It feels like a French comedy (and was produced by French comedy specialist Francis Veber), and while it somehow has become a bit of a forgotten or overlooked film in time, I heartily recommend it for anyone who needs a good honest laugh. From director Nadia Tass.

Mill Creek’s brand new double feature Blu-ray edition of Cross My Heart and Pure Luck presents both films in high definition for the first time, and while there are no special features included, the pairing is nice and is affordably priced to own. 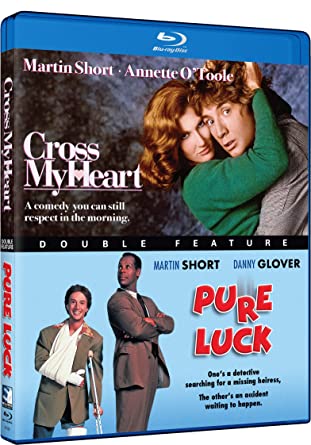