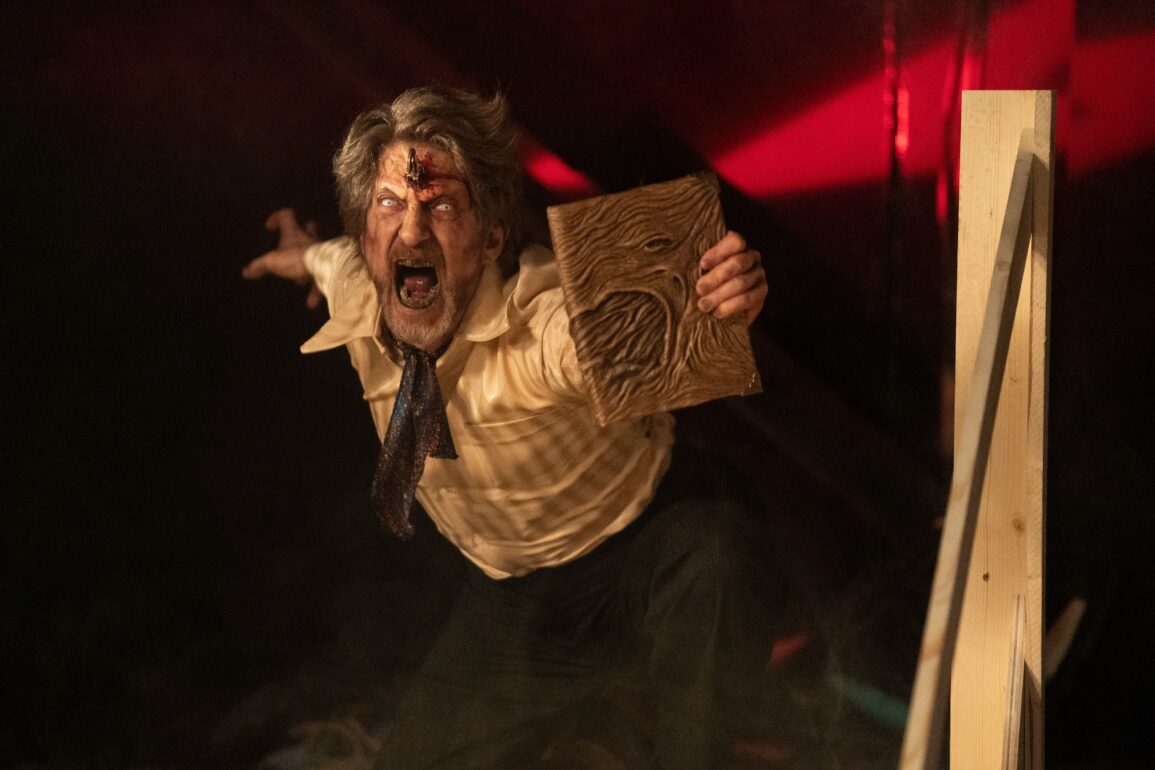 Creepshow Season 2 offers some real fun and some bummers too, but for the most part, it’s a good time. Recommended.

An assortment of morbid tales with a bunch of guest starring roles.

The revamped Creepshow series, which takes its cues from the George Romero / Stephen King film from 1982 and runs with it, is a welcome horror anthology series that runs on the Shudder network. In season two, there are a total of seven episodes, but most of the episodes are divided up into two segments, with each episode running about 45 minutes.

The first episode was a pretty good one: “Model Kid” is an early ’80s tale about a boy living with his cancer-ridden mother, who gets an unexpected live-in guest in his mean uncle (Kevin Dillon) who hates the fact that he’s a “monster kid” who loves horror movies and making model kits of cool monsters. When the kid sends away for a special monster kit that gives him control over anyone he wants to get rid of, his monsters come to life! The second half of the episode is “Public Television of the Dead,” and it’s a doozy! In the late 1970’s, a public access show is struggling to maintain the ratings of its three most popular shows: a puppet show, a painting instructional (like Bob Ross), and a talk show that discusses rare thrift store / antique store finds. When the day’s talk show guest brings The Necronomicon (yes, that one) book on the show, expected to be told he has a rare book worth a few hundred bucks, the host reads out loud some cursed words and brings some Deadites into the studio, causing a maelstrom that only the Vietnam vet painter in the studio can battle!

The Second episode starts with “Dead and Breakfast,” which focuses on a struggling bed and breakfast “horror house” hosted by the grandchildren of a forgotten serial killer old lady who supposedly murdered her guests and buried them somewhere on the grounds of the house many years ago. The grandchildren (played by C. Thomas Howell and Ali Larter) invite a serial killer aficionado / blogger to stay the weekend to try to drum up business, but the plan completely backfires when the blogger writes a terrible review, prompting the wrath of the grandchildren who tap into the evil dwelling in the house. The second part of the episode is “Pesticide,” about a slapdash exterminator who gets an offer from a mysterious businessman (played by Keith David) to “exterminate” some human pests from his properties. This episode left a bit to be desired.

The third episodes begins with “The Right Snuff:” In the future, two astronauts – Ted (Breckin Meyer) and Alex (Ryan Kwanten) – are on a vital mission in space, using a special, way-ahead-of-its-time gravity device that Ted invented when they get a transmission from Earth that an alien race is closing in on Earth and humanity needs an emissary – just one of them – to greet the aliens, who are proposing a palaver. Ted is chosen – by both humanity and the alien race – to be the ambassador, which further aggravates Alex’s stewing jealousy over his counterpart’s accomplishments. Not only will Ted be remembered as the creator of the device that their mission is founded on, but he’ll also be the first human from Earth to greet an alien race. This does not sit well with Alex, and so he sabotages Ted and murders him, using the very device Ted invented to do it. Alex suits up, goes to meet the aliens (huge, crab-like monster-looking things that can communicate in English), and the aliens read Alex’s mind and see what he has done: Murder and treachery, and what’s worse is that the aliens tell him that Ted was, in fact, one of them, and was used as a test subject to gauge mankind’s ability to navigate their shortcomings and strivings. Because of Alex’s murderous, selfish act, the device he used to kill his compatriot has caused the moon to lose its gravity and will collide with earth in mere moments. And it does. And Alex gets to watch. The second half of the episode “Sibling Rivalry” is pretty good too: A high school girl thinks her brother is trying to kill her (he is), and she relates this to her school councilor (played by Molly Ringwald). But the truth is far more revealing – her brother is the only one who knows that his sister is a vampire, and because she killed (drank) their parents and can’t remember it, he considers it his duty to slay her. The ending is a bit of a surprise.

Episode four was pretty good: “Pipe Screams” concerns a low rent tenement building whose landlord (played by Barbara Crampton) skimps on everything, including pest control, but when a creature in the drainpipes causes damage to everyone’s plumping, a plumber is called out, and what he finds in the pipes is … really, really gross … and hungry! The second half of the episode is “Within the Walls of Madness,” which is about a guy who is faced with a Cthulu-like god that calls to him and eventually reveals itself to be as monstrous and maddening as he imagined.

Episode five was likely my least favorite of them all: “Night of the Living Late Show” is about an inventor (played by Justin Long) whose unhappy marriage comes to a boil when his rich, but loving wife finally realizes that he loves his invention more than he loves her. He has perfected a virtual reality machine that allows him to live inside his favorite movies, mainly the underrated horror film Horror Express with Peter Cushing and Christopher Lee, and the beautiful Silvia Tortosa, whom he begins a virtual affair with. When his wife finds out what’s going on, she takes drastic measures to ensure that her inventor husband will stay trapped in a movie … forever.

There’s also an animated special, and while the animation is hardly what I’d call visually interesting or “special,” the animation resembled a motion comic book strip with constant narration. The first half is “Survivor Type,” which is based on a story by Stephen King. This one is about a surgeon (voiced by Kiefer Sutherland) whose plane crashes and he washes ashore on a tiny deserted island. As he slowly starves to death, he carefully amputates portions of his body to eat, a little at a time until he literally eats himself to death. The second portion of the episode is much more fun: “Twittering From the Circus of the Dead” is about a bored teen girl tweeting her exploits as she is on a road trip with her brother and her parents. They take a wrong turn and end up at a weird “circus of the dead” event where the entire circus is a freak show involving zombies and real death. Thinking that the entire thing is fake, the girl keeps tweeting her confusion until she realizes (too late) that the entire audience is going to die as part of the attraction.

The final episode was fun: Billed as the “holiday special,” this one is entitled “Shapeshifters Anonymous” about five shapeshifters who meet weekly to talk about the fact that they are “were” creatures. One is a werecheetah, one is a wereturtle, one is a wereboar, and the new guy (who has only come to realize that he’s a weresomething) turns out to be a werewolf. When their meeting is interrupted by a devilish Santa Claus and his minions (because Santa kills shapeshifters, apparently), the shapeshifters must band together and duke it out with old Saint Nick.

Creepshow Season 2 offers some real fun and some bummers too, but for the most part, it’s a good time. Recommended.

RLJE has just released this on Blu-ray and DVD, and the two discs come with photo galleries, a booklet, featurettes, raw footage, and a reversible sleeve. 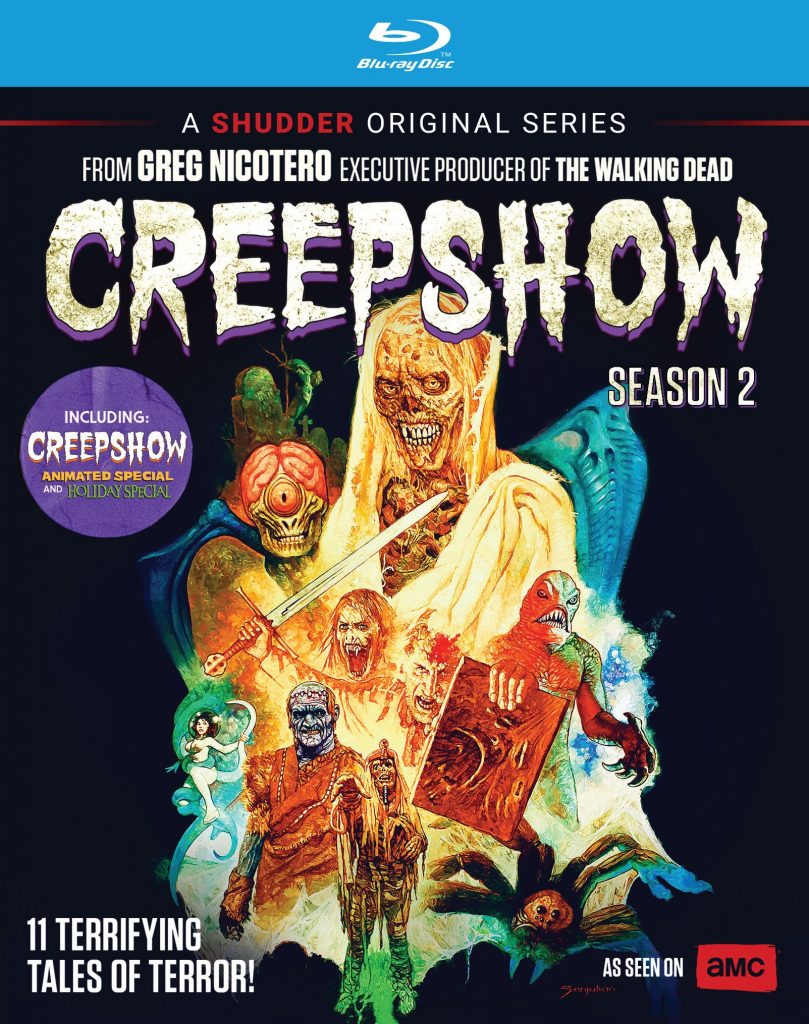