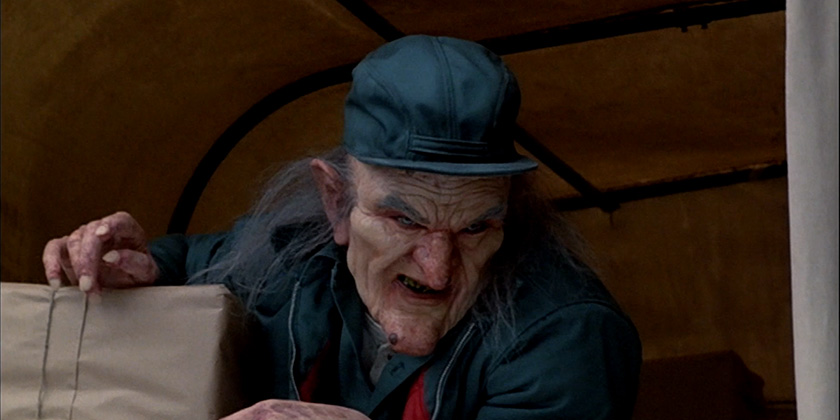 All three stories are hugely entertaining and this deserves the same love that the original gets. The Blu-ray is a must-have too.

Plot: Three more bone-chilling tales that include a vengeful wooden Native American, a monstrous blob in a lake, and a hitchhiker who wants revenge and will not die.

Review: It’s a mystery why audiences haven’t given Creepshow 2 the love it deserves. Creepier (by far!) than the original, it features some really fun and eyebrow-raising horror segments (there are three, plus an animated wrap-around segment), and it feels closer to the original EC comic source material than even the first, somewhat iconic, film directed by George Romero. Part 2 – as directed by Romero’s then-cinematographer Michael Gornick – is “flatter” and less stylish than the first movie, but how can you ignore how horrifying and dread-inducing these segments are?

The first entry is “Old Chief Wood’nhead” about an elderly couple that run a hardware store in a dying town. Out front on the porch is the old wooden Indian that is a silent sentry, looking down with disdain upon the world, except when the old man (played by George Kennedy) cleans him day after day, treating it with respect. When some hooligans break in the store and murder the old couple, Old Chief Wood’nehead comes alive and goes on the warpath … and comes back with some scalps!

The second entry is astonishing. “The Raft” concerns two young couples that go out to a remote lake, looking to go swimming and smoke some weed. It’s a familiar set-up that we’ve all seen before, except this time there’s an organism living in the lake: a glop of heinous material that eats living flesh, and it preys upon the four teens with devastating results! The special effects and shocks in this sequence are through the roof, and there’s nothing else quite like it.

The third, and final entry (not counting the wrap-around sequence) is a hoot: A cheating socialite (played by Lois Chiles) is half-drunk when she runs over an African American vagrant on a vacant stretch of road. Instead of helping the man, she leaves him to die, and the corpse of the vagrant haunts her with hilarious results as she’s just trying to make her way home …

Creepshow 2 is a movie I ignored all these years because of the negative reviews and the way it was sidelined in the wake of its predecessor’s larger shadow. BIG MISTAKE. This is a movie worthy of discovery or rediscovery in a very big way. Fun, gory, inventive, and scary, it’s an anthology film that deserves a rightful place amongst the best of its ilk. Arrow Video has resurrected it for high definition with a definitive Blu-ray release packed with lots of special features. In addition to the 2K transfer, it has an audio commentary by the director, and several on-camera interviews, archival features, and a reversible slip cover with the original theatrical artwork, as well as newly commissioned artwork.