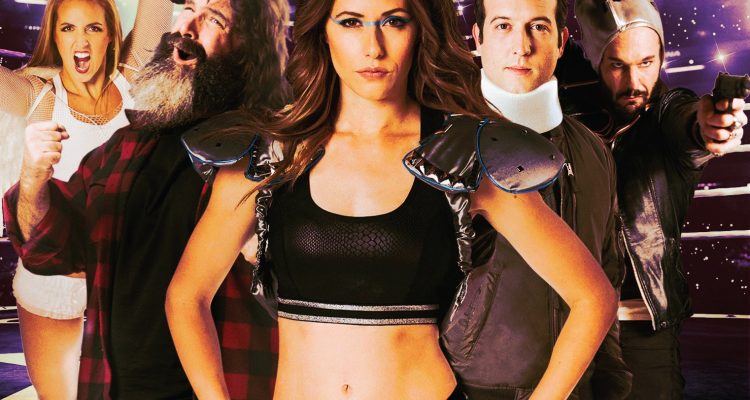 Chokeslam will be an acquired taste and it’s not as funny as it could be but the target audience will enjoy it.

Plot: A mild-mannered deli clerk finally gets a second chance to pursue his high school sweetheart, a notorious female professional wrestler, when she returns for their ten-year reunion.

Review: Nebbish and withdrawn Corey (Chris Marquette) has been working behind the counter of a deli for years. His life since high school hasn’t been anything like he thought it would be, and when one day a masked robber holds him at gunpoint for the cash in the register, he manages to turn the situation around and make it look like the robber (played by Michael Eklund) actually saved the day instead of ruining it. By doing this, Corey makes a buddy out of the loser, whom he remembers from high school as a popular kid, and they decide to go to their 10-year high school reunion together for the heck of it. At the reunion, Corey is faced with the painful memory he has been hiding from for a decade: the day he proposed to his best friend Sheena (Amanda Crew) who, after painfully rejecting his proposal, went on to become a celebrity wrestler known as Smasheena, the only person from their town to make anything significant out of their lives. When he runs into Sheena at the reunion, his life is turned upside down when they pick up their friendship again. Sheena and Corey team up to put on a “retiring” show for Sheena, which puts the whole town in their periphery. In the midst of the wrestling chaos of creating a show, Corey and Sheena slowly but surely fall for each other, but this time Corey comes out a winner.

Timely released on the coattails of the Netflix series Glow, Chokeslam might appeal to the same audience, as it offers a cute behind the scenes look at female wrestling and wrestling in general. It’s a romantic comedy at heart, and the performers do a nice job with what they’re given. It’s not as punchy or as whipsmart or funny as it should be, but there’s definitely an audience for this sort of thing. It feels like one the of the WWE films that showcase their wrestlers. And speaking of WWE superstars, Mick Foley is in it in a supporting role. From director Robert Cuffley.