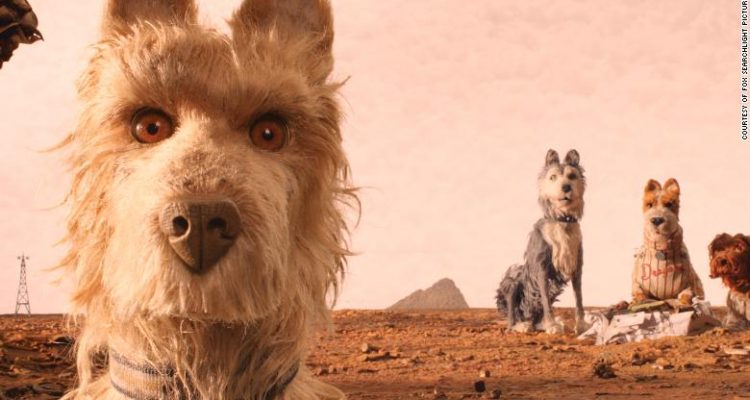 Isle of Dogs is one of Wes Anderson’s finest hours with his quirky sense of humour and beautiful animation, it’s a must-see.

Plot: When, by executive decree, all the canine pets of Megasaki City are exiled to a vast garbage-dump called Trash Island, 12-year-old Atari sets off alone in a miniature Junior-Turbo Prop and flies across the river in search of his bodyguard-dog, Spots. There, with the assistance of a pack of newly-found mongrel friends, he begins an epic journey that will decide the fate and future of the entire Prefecture.

Review: Isle of Dogs is directed by critically acclaimed director Wes Anderson (Grand Budapest Hotel), who has dabbled in stop-motion animation before, the first film being The Fantastic Mister Fox.

The Isle of Dogs has many moving parts and plots, from a boy looking for his dog, government corruption, to scientists trying to find a cure for the “dog-flu”, but the movie does a fantastic job keeping you interested and invested from start to finish. The movie at its core is a love story between man and man’s best friend.

The Isle of Dogs stars a boatload of celebrities from Bryan Cranston, Edward Norton, Bill Murray, Jeff Goldblum, Greta Gerwig, Frances McDormand, Scarlett Johansson, Liev Schreiber, Courtney B. Vance, Yoko Ono, Tilda Swinton and the list goes on! The cast is extraordinary, and they really shine within all their parts, I especially liked Tilda Swinton’s character of the Oracle; hilarious and genius!

The movie is wonderfully animated – from stop-motion animation to actual drawn animation; this movie is a visual delight. Granted, if you’re not use to this kind of animation, it may look a bit odd and jarring, but for me, I loved it. You can tell Anderson and the animation team took a lot of time creating this Japanese world and visually it’s astounding. Lots of attention to detail.

The Isle of Dogs is very clever, and witty. The humour is subtle, but when there is humour, it’s clever and impactful. Also, the writing is superlative; the movie sweeps you in with its storytelling and keeps you invested.

One thing I really appreciate about this movie is that they speak Japanese constantly throughout this film. Movies nowadays constantly use English rather than using the native language *cough*Red Sparrow*cough*. Thus, if the movie is set in Japan, I want to have dialogue in Japanese, and that’s what they did in this movie. The main human characters mostly spoke Japanese and the dogs spoke English, which was explained at the beginning of the movie “All barks have been rendered into English.” The movie cleverly uses subtitles to convey what people are saying in the scenes by using interpreters on computers to translate what’s happening, which I thought was very clever and allowed me to understand the movie without being confused.

Overall I personally think this is one of Wes Anderson’s best movies. It’s a visual delight from start to finish that will keep you invested with its storytelling. I believe everyone will appreciate this movie, even if you’re a cat lover…