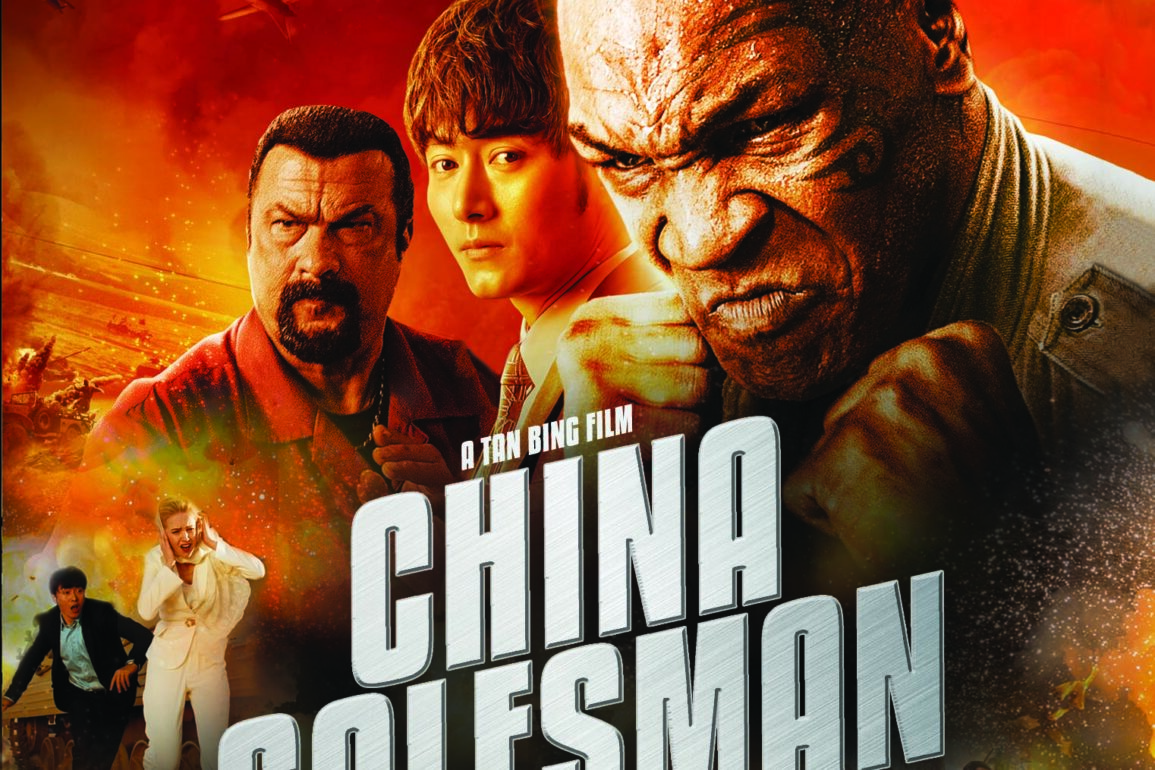 I loved it because it made me laugh hard, and no matter how studiously anyone on earth may try to duplicate a great “bad movie,” they’ll never be able to duplicate this great bad movie. It’s just … perfect. If you can watch it with friends or a crowd, I highly – very highly – recommend you do so.

Plot: Yan Jian, a young Chinese IT engineer who volunteers to go to North Africa and help the company he works for to win a competition. The winner can own the right to control the communication between south and north.

Review: The movie lords have heard our deepest and most fervent desires: They’ve given us a rare and delectable treat wrapped up in the package that is called China Salesman! Who actually knew that one day the superstar of Above the Law and Under Siege (that would be the venerable Steven Seagal, ladies and gentleman) would co-star in a completely gonzo bonkers action comedy starring former world heavyweight champion icon Mike Freaking Tyson? And not only that, people of Earth, but Mike Freaking Tyson would knock Seagal’s lights out in a fight scene that opens the movie? Granted, Seagal and Tyson don’t look like they’re ever in the same frame together (a Seagal specialty for a long time), but Tyson and Seagal and Seagal’s stunt double have a long, drawn out (and actually quite needless to the plot) fight scene that climaxes with Tyson knocking Seagal’s character the ef out. For anyone who’s followed Seagal’s career, you’ll know that this just DOES NOT HAPPEN. EVER. For Seagal to even get a bloody lip in a movie is unheard of, let alone GETTING KNOCKED OUT. The only times he ever died on screen (Executive Decision and Machete), he basically killed himself, so there’s an ego there that you can practically smell, but here we are in the first big scene of the movie and he gets his lights punched out by Mike Tyson! Whoa!

I earlier said this was an action comedy. Yes, because if I didn’t say that I’d be lying. The real selling point of China Salesman is not just that Seagal and Tyson are in it, but that once the movie gets going with its techno gobbledygook (the plot has something to do with a salesman from China visiting Africa to bid on a telecom deal that would put Africa up to speed in terms of the speed of their internet … or something), the film magically becomes a gut busting laugh riot that had me in stitches for minutes on end. Just when the movie simmers down and becomes boring, somehow – by some miracle – the movie lands a turkey bomb of a scene or a series of line deliveries by Tyson, Seagal, or the film’s unintelligible Chinese star Dong-Xue Li, and all of a sudden you’re laughing until it hurts again. Listen: I’m not a fan of making fun of movies. I despise Mystery Science Theater and heaping sarcastic ridicule on movies. But when something as glorious as China Salesman comes along with its complete and total miscalculation from its inception onwards, you’ve gotta stop and praise it. So few movies feel as wrong or as calamitous as this one does, but even as it goes up in flames, you’re holding it up, cheering it on to hobble to the finish line with its limbs and heart and soul turning to ash as it crumbles mid-stride.

I didn’t love China Salesman because it’s just a great movie. Steven Seagal is barely in it, and he plays a character who has no purpose whatsoever to the nonsensical plot. I didn’t love it just because Tyson, who’s completely miscast in it, delivers a gaggle of lines in a way that only he can deliver them. I didn’t just love it because Dong-Xue Li seems completely clueless to the sort of mess he’s in the middle of. I didn’t just love it because it’s one of the most jaw-droppingly obvious Chinese propaganda pieces I’ve ever seen. I loved it because it made me laugh hard, and no matter how studiously anyone on earth may try to duplicate a great “bad movie,” they’ll never be able to duplicate this great bad movie. It’s just … perfect. If you can watch it with friends or a crowd, I highly – very highly – recommend you do so.