A precursor to the immensely popular Sex and the City phenomenon, this film has a shallow mindset, but a soft heart, and it’s all ’80s, which is appealing.

Review:
Stacy (Lea Thompson) and her best friend Melissa (Victoria Jackson) live in Los Angeles in the ’80s and go from one fling to the next, never quite learning how to navigate their hearts or their feelings as they struggle to figure out how to cultivate a strong, meaningful relationship. Stacy is more experienced than Melissa, but Stacy also has come to understand that she always resorts to taking care of the men she sleeps with, which is something she wants to quit. When they go away for a week to a resort that caters to young singles, both of them very quickly pick their mates: Stacy hooks up with an attractive singer (played by Stephen Shellen), and Melissa, while attracted to the bartender (Jerry Levine), somehow ends up hooking up with a stuffy analyst (played by Peter Dvorsky). In the midst of their endeavors, there’s a hyper masculine guy from Jersey named Vinny (Andrew Dice Clay) who clearly has the hots for Stacy, but she sees right through his routine and isn’t interested. But as the week progresses, things shift, and Stacy comes to the realization that her singer beau is just like all of her previous boyfriends, and Melissa finally lands her bartender. But Stacy’s big revelation will come later when someone she knows comes around, much more mature and sensitive than she could have imagined …

Based on a stage play (and it shows), Casual Sex? remains the only film to be directed by Genevieve Robert, who married this film’s producer Ivan Reitman. The movie has a bit of a stagnant feel, but it eventually wore me down with a surprisingly sweet happy ending that I wasn’t expecting. It’s also a Christmas movie, which was a surprise. A precursor to the immensely popular Sex and the City phenomenon, this film has a shallow mindset, but a soft heart, and it’s all ’80s, which is appealing.

Mill Creek has just reissued Casual Sex? onto Blu-ray, and while the transfer is nice, the disc doesn’t come with any special features. It’s presented in a retro VHS style packaging. 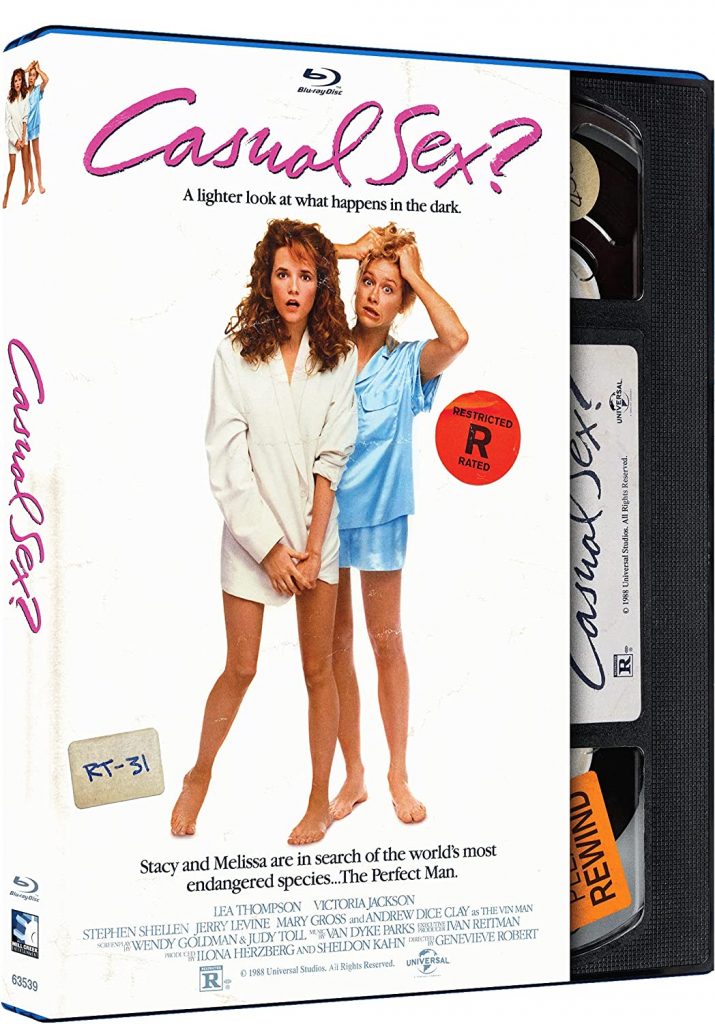