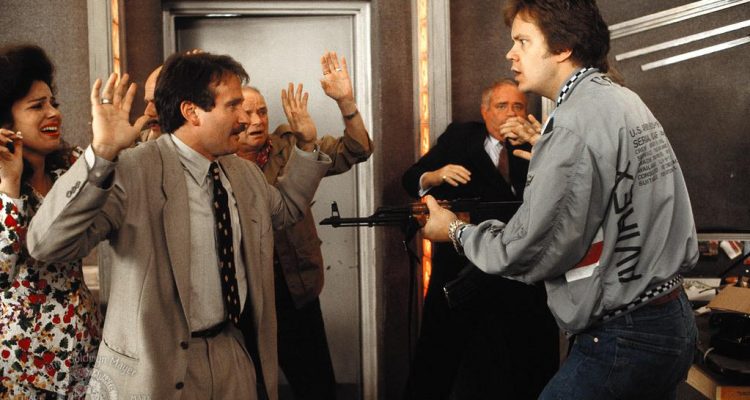 Williams is good, but could have been GREAT in this. Kino’s new Blu-ray contains a newly recorded audio commentary by the director.

Plot: Joey is a car salesman, with an ex-wife, a daughter in trouble, a girlfriend, a married lover, and a 20 thousand dollar debt to the mob… and he’s 24 hours away from losing his job! Thank God, all his troubles will go away thanks to a lunatic who takes him as hostage!

Review: Ever a salesman, Joey O’Brien (Robin Williams) can scrape his way out of almost any bad situation, but with a massive debt to the mob, two needy girlfriends, an ex-wife who demands alimony, and a job at a car dealership that he’s most likely going to lose, he’s just about reached his limit. On the day of the “big sale” at the car dealership, he’s supposed to be fast tracking at least a dozen sales, but everything goes sideways when a maniac on a motorcycle (played by Tim Robbins) crashes through the door, wielding a machine gun and holding everyone hostage because his wife (an employee at the car dealership) has made a cuckold out of him. In a do or die situation, Joey takes the reins and finagles his way into the maniac’s psyche to redeem not just himself as a man, but to save everyone in the building.

A silly little comedic drama from genre director Roger Donaldson, Cadillac Man never quite hits it out of the park, as it keeps Williams on a leash from going hog wild with his character. Williams is good in it, but the character needed a better writer to make him shine. As it stands, the film meanders a little too much and reaches a happy Hollywood ending, whereas a sharper and more perceptive filmmaker might have really skirted the edge between satire and heightened suspense.

Kino Lorber’s new Blu-ray of Cadillac Man is an improvement over the previous MGM DVD from over a decade ago, and the disc contains a new audio commentary by director Donaldson and a moderator, as well as the theatrical trailer.