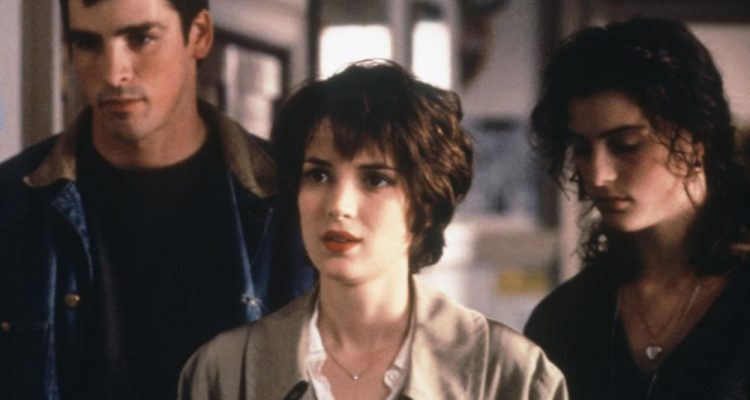 A promising concept with some nice little moments but it’s a compromised film, and you can tell. The characters aren’t very interesting, and the story is lacking. It doesn’t add up to much.

Synopsis: Patty Vare falls off a horse and is found unconscious by preparatory school student John Baker. He takes her to his dormitory. As he quickly discovers, she is hiding from something. For John this becomes a road to maturity and for Patty, it’s a way back to love and tenderness.

Review: A young man named John Baker Jr. (Lukas Haas) living in a dorm at a prep school is incredibly unhappy and restless with his life. From one day to the next, everything changes for him when a slightly older woman (supposedly she’s 25, played by Winona Ryder) is found unconscious by a few of his friends in a field near the school. John brings her to his dorm, where she wakes up, disoriented, afraid, and yet still alluringly beautiful, and he offers her his protection, though he knows nothing about her, only that he’s attracted to her. As they talk and try to get a sense of each other, they decide to go out on the town to a fair nearby, and it’s there where John starts to develop feelings for her, and perhaps she him, but it’s very obvious that she’s in some trouble and has a serious secret that she’s keeping. Meanwhile, the police in the area are looking for her and for a man that was last seen with her, but John doesn’t care what she’s done or if he’ll get in trouble or expelled from school for helping her: He’s in love.

Boys, from writer and director Stacy Cochran, has some promising little moments in it, but ultimately this is a sadly compromised film that was obviously reedited and toned down to make it PG-13. You can see where the ADR deletes profanity, and the structure of the movie is disjointed and a little confusing. It also doesn’t help that the coming of age story isn’t especially compelling, and the movie doesn’t amount to much by the end. The characters, while well acted by the performers, aren’t very interesting, and Cochran’s directing is lacking in focus. A shame, because this might have been a special little movie.

Kino Lorber’s new Blu-ray of Boys marks the first time the film is presented in HD. The quality of the picture isn’t as sharp or clear as most of the output from Kino, but they pulled out all the stops for special features, including an audio commentary by the director, on-screen auditions, B-roll footage, a music video, a featurette, and the trailer.