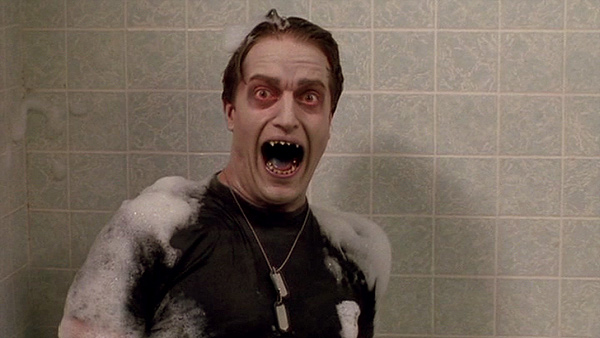 It Bears no resemblance to the first movie and it’s only available in limited supply but it’s not without its moments.

Synopsis: A military experiment to create a race of super-warriors goes awry, and legions of murderous zombies are unleashed upon a suburban neighborhood.

Review: I was dreading the process of watching and reviewing C.H.U.D. II simply because I saw the movie years ago and it left a bad taste in my mouth. My dread couldn’t have been more misguided because when I put the disc in to watch Lionsgate’s new “Collector’s Series” Blu-ray, my former impression quickly melted away and it was like I was seeing the movie for the first time. Sure, it’s an in-name only sequel that’s cheaper, sillier, and wackier than the really solid original movie, but it’s quirky and entertaining almost from the get-go.

The military (whose emissary, played by Robert Vaughn, perpetually seems drunk) is trying to revive the old C.H.U.D. program – reanimating the corpses of dead soldiers – but a couple of slacker high schoolers break into the morgue and steal a frozen C.H.U.D. cadaver and bring it back home to perform some experiments on it. The cadaver – named Bud from his dog tags – thaws out in the bathtub and comes back to life and experiences the bizarre reality of suburbia through C.H.U.D. eyes. Basically, Bud is Link from Encino Man, and he’s like a zombie caveman who escapes the two teenagers who stole him from the lab and he trolls the streets of suburbia, eating brains and making more C.H.U.D.s with his infection. Pretty soon, every jazzercising spinster, barber, waitress, and homeless weirdo in town is a C.H.U.D. and headed to the high school Halloween dance, and the situation is beyond the military’s control, so leave it to the kids who unleashed Bud the C.H.U.D. in the first place to put their science experiments to the test to save the town!

I’ve got to admit that I really enjoyed C.H.U.D. II. It’s completely spoofy and wacky, but the humor worked for me in the same way Encino Man works for me. It has no right or reason to be called C.H.U.D., but aside from that it’s a fun midnight movie, and I’m glad Lionsgate released it as part of their revamped “Vestron Video” collector’s series. It’s #5 in the series, and they’ve only pressed a limited run, so grab one while you can. The newly produced special features include a commentary by director David Irving, and on-camera interviews with two of the actors, as well as a trailer and a still gallery.