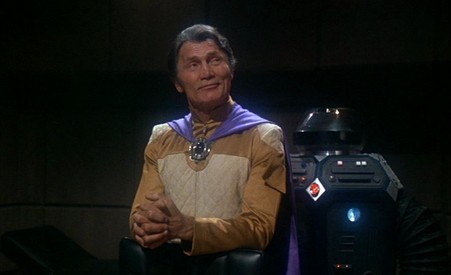 Post-apocalyptic movie fans may be interested in the generic themes of radiation, and relocating off world. The Blu-ray is well remastered with some interesting special features.

Synopsis: In the future, human race sets up colonies on the Moon, when Earth becomes uninhabitable. A madman decides to destroy the Moon colonies with his robots and automated ships and only three people and their robot dog can stop him.

Review: In a distant time (“the tomorrow after tomorrow”), most of mankind has left Earth to live on a moon colony. The Robot Wars decimated Earth and both the humans left on Earth and those living on the moon suffer from radiation sickness as a result, even generations later. A vaccine has been manufactured on the moon, and everybody must take dosages daily to remain healthy, but the Emperor Omus (Jack Palance doing what Palace was great at) holds the vaccine hostage on his enclave with specific demands. A plan at New Washington (on the lunar colony) comes together to get the vaccine back so that the people of Earth and everyone else on the moon can resume their meds and stay healthy: A doctor and his scientist daughter and another scientist undertake a mission to the Emperor’s enclave, but they briefly visit Earth first and find a whole clan of irradiated children living amongst themselves. The climax involves a confrontation between the evil Emperor Omus with a glass jar on his head screaming for mercy and the good scientists cranking up a sinister sound wave.

Easy to deride for its cheapness and clumsy attempt to capitalize on the whole science fiction inrushing of Star Wars clones and Battlestar Galactica riffs, The Shape of Things to Come tries to be sincere, but it just can’t cut the mustard. Post-apocalyptic movie fans may be interested in the generic themes of radiation, and relocating off world, but for the most part this doesn’t offer anything new or interesting for devoted fans of the genre. The robots and hardware in the film are clunky looking and the special effects are ’70s TV quality. Made in Canada and inspired by an H.G. Wells story. Directed by George McCowan.

Blue Underground went out of their way to upgrade their previous DVD release of The Shape of Things to Come onto high definition, and while the film looks and sounds great with crisp, clear images and sound, you might wonder why they took the effort. Newly produced special features include “Jason’s Journey: Interview with Star Nicholas Campbell,” “Symphonies in Space: Interview with Composer Paul Hoffert,” and trailers, still galleries, and more.