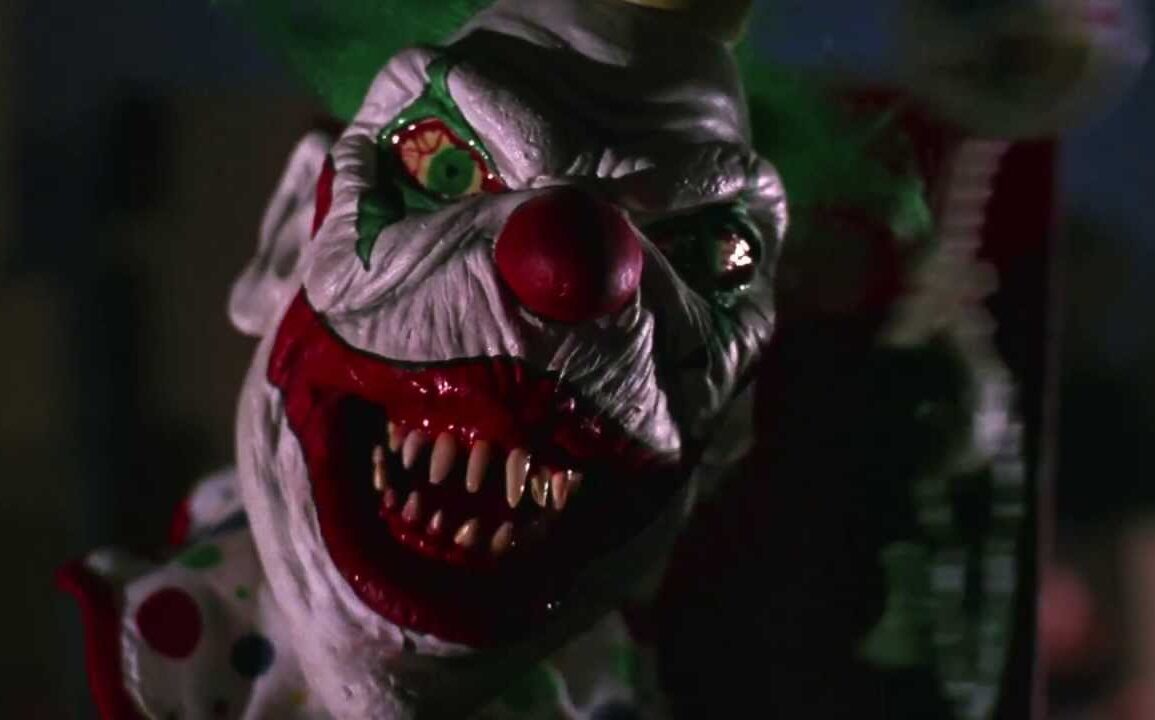 The special effects still hold up well and there’s some decent gore. The Blu-ray is well remastered.

Plot: A pregnant policewoman, her quarry, and an innocent delivery boy become trapped in a haunted toy warehouse.

Review: On a dark and fated night, two undercover cops on a stakeout find themselves in a whole lot of trouble when their cover is blown. Detective Gray (Tracy Scoggins) is pregnant, and she tells her partner so just before he’s heartlessly gunned down by their suspects, and in a rage she chases her partner’s murderers into a warehouse that manufactures toys. Another thing that’s been bothering Gray lately is a series of haunting dreams where two little boys are playing a card game of war that seems much more intense than it should be. As she goes into the warehouse – inhabited by a lazy security guard and the fast food delivery boy just making his rounds – there’s much more going on in the warehouse than anyone could have suspected: a demon has awoken and has animated some toys to do its bidding, thus creating a world of chaos for Detective Gray and the thugs inside, not to mention the security guard and the delivery boy. It seems that the demon has set its sights on the detective’s unborn child so that it can be born unto the world. The ensuing night turns into a game of war between good and evil, as the demon’s foe – the good spirit of Gray’s unborn child – helps his mother fight for her life.

Demonic Toys falls in line with the material Full Moon Entertainment was offering up at the time. Following the success of Charles and Albert Band’s popular Puppetmaster series, Demonic Toys is a pretty sincere action horror flick framed around the concept of killer toys. The special effects are really good with a sizable gore and kill count quotient, and it’s a pretty seamless hybrid of action and creature feature. It was written by David S. Goyer, who would go on to have much success in Hollywood as the writer of the Blade movies and Christopher Nolan’s Dark Knight trilogy. It was directed by Peter Manoogian, and its sequel is Dollman vs Demonic Toys, which brought two Full Moon franchises together.

Full Moon recently released Demonic Toys onto a great looking Blu-ray. I’ve got to say that the Full Moon movies have never looked or sounded better than in their nicely remastered HD Blu-rays. The sound and picture quality far exceeds their crummy full-frame DVDs. This is the first time most of these fun films have ever been made available widescreen. Also included on the disc are catalogue trailers.